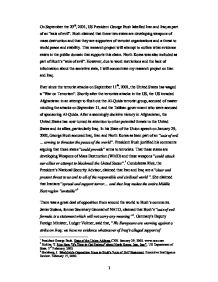 US President George Bush labelled Iran and Iraq as part of an &quot;axis of evil&quot;. Bush claimed that these two states are developing weapons of mass destruction and that they are supporters of terrorist organisations and a threat to world peace and stability -

On September the 20th, 2001, US President George Bush labelled Iran and Iraq as part of an "axis of evil". Bush claimed that these two states are developing weapons of mass destruction and that they are supporters of terrorist organisations and a threat to world peace and stability. This research project will attempt to outline what evidence exists in the public domain that supports this claim. North Korea was also included as part of Bush's "axis of evil". However, due to word restrictions and the lack of information about the secretive state, I will concentrate my research project on Iran and Iraq. Ever since the terrorist attacks on September 11th, 2001, the United States has waged a "War on Terrorism". Shortly after the terrorists attacks in the US, the US invaded Afghanistan in an attempt to flush out the Al-Quida terrorist group, accused of master minding the attacks on September 11, and the Taliban government who were accused of sponsoring Al-Quida. After a seemingly decisive victory in Afghanistan, the United States has now turned its attention to other potential threats to the United States and its allies, particularly Iraq. In his State of the Union speech on January 29, 2002, George Bush accused Iraq, Iran and North Korea as been part of an "axis of evil ... arming to threaten the peace of the world". President Bush justified his comments arguing that these states "could provide" arms to terrorists. That these states are developing Weapons of Mass Destruction (WMD) and these weapons "could attack our allies or attempt to blackmail the United States".1 Condoleeza Rice, the President's National Security Advisor, claimed that Iran and Iraq are a "clear and present threat to us and to all of the responsible and civilised world". She claimed that Iranians "spread and support terror... and that Iraq makes the entire Middle East region "unstable"2 There was a great deal of opposition from around the world to Bush's comments. ...read more.

sites would be difficult because "back ups" sites have been built and if one site is detected "or is in danger of discovery all activity is immediately transferred to the back-up facility"47. Hamza also claims that Iraq distributes its nuclear infrastructure amongst Iraqi corporations to disguise its real intent.48 Hamza's evidence to Congress suggests that not only has Iraq continued and rebuilt its nuclear programme, but that Iraq may have also developed multiple production sites. Iraq has also retained many of its experienced nuclear scientists and technicians and has retained much of its past nuclear documentation and data.49 The recent assessment by the British Government on Iraq's nuclear programme stated that indeed Iraq was still attempting to enrich uranium for nuclear weapons.50 German Intelligence suggest, and collaborated by Hamza, that Iraq has in its possession "more than 10 tons of uranium and more than one ton of slightly enriched uranium", which means that Iraq has enough to generate the needed bomb grade uranium for three nuclear weapons by 2005"51. Other indications of Iraq's continued involvement in producing nuclear weapons is the fact that Iraq has no civilian nuclear programme and therefore would have no use for uranium. What Iraq does not have is the equipment to turn this uranium into weapons grade material. However, there are reports that Iraq has been attempting to buy equipment that is used in the enriching of uranium.52 Such activity is certainly indicative of a country attempting to build a nuclear weapon. How close Iraq is to building a nuclear weapon is the subject of conjecture. The US Department of Defense estimates that if Iraq had foreign aid it could produce a weapon in 5 years53. Other reports have suggested anywhere from 2-5 years. Dr Khidhir Hamza's evidence to congress is the only information from a source that had direct involvement with Iraq's nuclear programme. Other reports are based upon conjecture. ...read more.