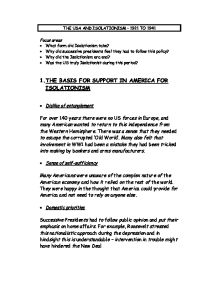 THE USA AND ISOLATIONISM - 1921 TO 1941 Focus areas * What form did Isolationism take? * Why did successive presidents feel they had to follow this policy? * Why did the Isolationism era end? * Was the US truly Isolationist during this period? 1. THE BASIS FOR SUPPORT IN AMERICA FOR ISOLATIONISM * Dislike of entanglement For over 140 years there were no US forces in Europe, and many American wanted to return to this independence from the Western Hemisphere. There was a sense that they needed to escape the corrupted 'Old World'. Many also felt that involvement in WW1 had been a mistake they had been tricked into making by bankers and arms manufacturers. * Sense of self-sufficiency Many Americans were unaware of the complex nature of the American economy and how it relied on the rest of the world. They were happy in the thought that America could provide for America and not need to rely on anyone else. * Domestic priorities Successive Presidents had to follow public opinion and put their emphasis on home affairs. ...read more.

to Germany so they could pay their reparations, which were in turn given back to the Americans by GB and France as payments for war debts. German reparations were also reorganised in 1924 & 1929 by Charles Dawes and Owen Young. It was seen as being in the interests of America to rebuild Europe's economies as they consumed over 60% of America's exports * International peace agreements The Kellogg-Briand Pact (1928) was the brainchild of the US Sec of State and the French Foreign Minister. This was beneficial to the USA, as only war could remove America's economic dominance in the world. * 'Good Neighbour policy' This relates to America's policy in Latin America. It was first coined by FDR, but the policy was active in the 1920's. In this area the USA was far from isolationist, intervening or having its forces in many countries (eg Haiti). These were the actions of a country that thought they knew what was best for its neighbour. One example of this is its support for right-wing regimes (Nicaragua, Cuba, Dominican republic) ...read more.

Co-operation with GB extended in 1941 with Anglo-American naval planning; the US navy occupied Greenland to build naval bases; the US marines were sent to Iceland to prevent a possible German invasion; US merchant ships were armed before Pearl Harbour in response to German U-boat attacks; US helped GB navy to pinpoint U-boat positions; the US possibly provoked the Japanese to attack Pearl Harbour. * Action rather than words to counter Japanese and German aggression American destroyers were swapped for leases of GB bases in the Western Hemisphere (Sept, 1940) and a conscription bill was agreed in the same month. In March 1941 the Lend Lease agreement was made - this in realty was a declaration of economic warfare against the axis powers. * Continued strong opposition to American intervention in the Second World War After 1939, FDR was trying to educate the American public of the threat to US security if the Axis powers won, but isolationist feeling was still strong in July 1939. As well as the rejection of a proposed revision o the Neutrality laws, during most of 1940 & 1941, 80% of Americans opposed a declaration of war against the Axis powers, but did favour aid to victims of axis aggression. ...read more.