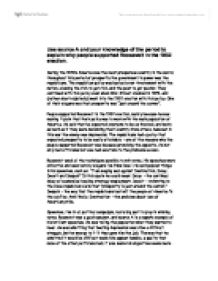 Use source A and your knowledge of the period to explain why people supported Roosevelt in the 1932 election. During the 1920's America was the most prosperous country in the world, throughout this period of prosperity the government in power was the republicans. The republican policy was basically non-involvement with the nation, allowing the rich to get rich, and the poor to get poorer. They continued with this policy even when Wall Street crashed in 1929, and (rather short-sightedly) ...read more.

The republicans had a policy that expected prosperity to be easily attainable - one of the reasons why the people supported Roosevelt was because promising the opposite. He not only had criticisms but also had solutions to the problems as well. Roosevelt used all the techniques possible to win votes. His speeches were effective and used catchy slogans like 'New Deal.' He said popular things in his speeches, such as: "I am waging war against Destruction, Delay, Deceit and Despair" In this quote he could mean: Delay - the continual delay of economical healing strategy employment. ...read more.

Speeches, like in all political campaigns, had a big part to play in winning votes. Roosevelt was a good speaker, and source A is a superb example of his brilliant speeches. He was telling the population what they wanted to hear. He was admitting that beating depression would be a difficult struggle, but he was up to it if they gave him the job. The way that he admitted it would be difficult made him appear humble, a quality that none of the other politicians had, it also made his objectives seem more realistic. When trying to win votes he was appealing to the ordinary person. ...read more.