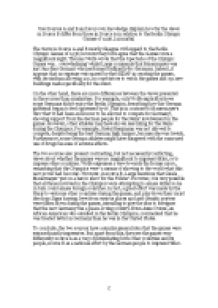 Use Sources A and B and your own knowledge. Explain how far the views in Source B differ from those in Source A in relation to the Berlin Olympic Games of 1936. [12 marks]

﻿Use Sources A and B and your own knowledge. Explain how far the views in Source B differ from those in Source A in relation to the Berlin Olympic Games of 1936. [12 marks] The views in Source A and B mostly disagree with regard to the Berlin Olympic Games of 1936; however they both agree that the Games were a magnificent sight. Thomas Wolfe wrote that the ?spectacle of the Olympic Games was? overwhelming? whilst Large comments that Mauermayer was just ?Another German? who performed brilliantly for Germany. Indeed, it appears that no expense was spared by the NSDAP in creating the games, with its stadium allowing 100,000 spectators to watch the games and 151 new buildings made specifically for the event. ...read more.

This is in contrast to Mauermayer?s view that ?it had been an honour to be allowed to compete for Germany?, showing support from the German people for the Nazis? involvement in the games. However, other athletes may have shown less liking for the Nazis during the Olympics. For example, Gretel Bergmann was not allowed to compete, despite being the best German high jumper, because she was Jewish. Furthermore, some German athletes might have disagreed with the rumoured use of drugs because of adverse effects. The two sources also present contrasting, but not necessarily conflicting, views about whether the games were so magnificent to impress Hitler, or to impress other countries. ...read more.

Signs barring Jews from various places and anti-Semitic posters were taken down during the games, intending to give the idea to foreigner that the new Germany was a peace-loving country. Even Jesse Owens, an African-American who excelled in the Berlin Olympics, commented that he was treated better in Germany than he was in the United States. To conclude, the two sources have a similar general idea that the games were extraordinarily impressive. But apart from this, they see the games very differently: source A as a way of intimidating both other countries and its people, source B as a national effort by the German people to impress Hitler. C ...read more.