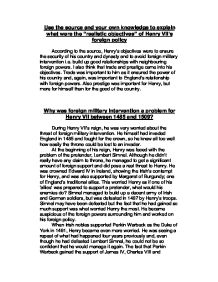 Use the source and your own knowledge to explain what were the "realistic objectives" of Henry VII's foreign policy According to the source, Henry's objectives were to ensure the security of his country and dynasty and to avoid foreign military intervention i.e. build up good relationships with neighbouring foreign powers. I also think that trade and prestige came into his objectives. Trade was important to him as it ensured the power of his country and, again, was important to England's relationship with foreign powers. Also prestige was important for Henry, but more for himself than for the good of the country. Why was foreign military intervention a problem for Henry VII between 1485 and 1509? During Henry VII's reign, he was very worried about the threat of foreign military intervention. He himself had invaded England in 1485 and fought for the crown, so he knew all too well how easily the throne could be lost to an invader. At the beginning of his reign, Henry was faced with the problem of the pretender, Lambert Simnel. Although he didn't really have any claim to throne, he managed to get a significant amount of foreign support and did pose a real threat to Henry. ...read more.

Therefore it was important that he defended England as well as he could, firstly to prevent anyone invading and stealing the throne and secondly to gain his subjects' favour and be popular, again lessening the chances of rebellions. At the beginning of his reign, Henry was faced with threats from pretenders. Therefore it was important for him to build up good relationships with the countries around him to ensure that no pretenders would be able to generate support abroad. In 1489 Henry gave military help to Maximilian to help him fund his civil wars. This was shrewd on Henry's part as it ensured Maximilian's appreciation and so he didn't support pretenders. And Henry didn't only offer military help to foreign powers: he also offered financial helps. During his reign he gave out huge amounts of money in the form of loans, such as huge loans to the Habsburgs from 1505 to 1509. This was, in a sense, 'protection' money as it helped Henry to build up strong relationships with foreign powers and prevented them from invading or turning against England. For the safety of his kingdom, Henry also had to form good relationships with foreign powers so that there would be no threat of invasion or war. ...read more.

Henry also wanted to show his power off at home and display his shrewd diplomacy by ensuring a lot of public celebration when Arthur and Catharine of Aragon married and inviting a lot of important foreign guests to the wedding. This was a form of propaganda and Henry used it to his full advantage. Then there was international prestige: Henry wanted to show off his artillery and large army and navy to show his power. He didn't go to war often, for the sake of his country, but when he did he put in a lot of effort to show that England was not an easy country to defeat. He also helped to settle problems between other countries e.g. between the Netherlands, France and Gelders in 1506. In conclusion Henry was very successful in achieving his objectives in foreign policy. He kept the country secure, avoiding large-scale invasions and maintaining good relationships with most foreign powers. He also maintained good trade agreements with foreign powers for most of his reign, keeping the economy of the country in balance. And he fulfilled his most important objective (to him), that is, ensuring the success of his dynasty. He was not usurped and the Tudors continued to reign for successfully for years after Henry died. ...read more.