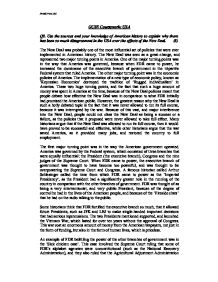 GCSE Coursework: USA Q8. Use the sources and your knowledge of American history to explain why there has been so much disagreement in the USA over the effects of the New Deal. (8) The New Deal was probably one of the most influential set of policies that were ever implemented in American history. The New Deal was seen as a great change, and represented two major turning points in America. One of the major turning points was in the way that America was governed, because when FDR came to power, he increased the dominance of the executive branch of government in the tri-partite Federal system that ruled America. The other major turning point was in the economic policies of America. The implementation of a new type of economic policy, known as 'Keynesian Economics' destroyed the tradition of 'Rugged individualism' in America. These two huge turning points, and the fact that such a huge amount of money was spent in America at the time, because of the New Deal policies meant that people debate how effective the New Deal was in comparison to what FDR initially had promised the American public. However, the greatest reason why the New Deal is such a hotly debated topic is the fact that it was never allowed to run its full course, because it was interrupted by the war. Because of this vast, and major interference into the New Deal, people could not class the New Deal as being a success or a failure, as the policies that it proposed were never allowed to take full effect. Many historians argue that if the New Deal was allowed to run its full course, then it would have proved to be successful and effective, while other historians argue that the war saved America, as it provided many jobs, and restored the country to full employment. The first major turning point was in the way the American government operated. ...read more.

This meant that the American market became self-saturated, as they weren't able to sell their goods abroad very easily. This coupled with the new idea of mass production using an assembly line led to saturated markets, falling profits, and to a huge growth in unemployment. In addition, during the 1920s there was a 'credit-boom'. At that time, the banks were not properly regulated by the Federal Government and lent out enormous amounts of money. At this time, new plots of land could be bought with a 10% 'binder', and shares could be bought 'on the margin' with a simple 10% down payment. As a result, banks' asset ratios became desperately low. As well as these problems, some problems in agriculture resulted in countless numbers of extra unemployed. The over-farming in the Western states of the country resulted in the 'dust bowl', which meant that the soil became very arid, and simply blew away, leaving the West in darkness, due to clouds of swirling dust. Also, an insect known as the 'boll-weevil' attacked the cotton crop in the South leaving thousands of 'share-croppers' in that area unemployed, and led to the great migration North in look for employment. In Source K, it talks about how the ordinary American would have been unable to survive the Depression without the help of Government benefits. This Source says that everyone was hit hard, even the rich, but they had something left to fall back on, but the ordinary American, and the poorer Americans had no chance of surviving, and would have most probably starved otherwise. In Source K, it says that 'The New Deal meant that ordinary people would have a better chance in life'. The Source also says that FDR understood what the situation demanded, and acted accordingly to ensure that the people worst hit by the Depression received the most help. Another Source that supports that the country was in dire need of assistance is Source D. ...read more.

Brogan also argues that as FDR served in Wilson's cabinet between 1912 and 1920, he just carried on where they left off, so he was not really revolutionary in the way he governed the country. FDR had similar ideas to the Progressives, as all of them wanted to help the poor in America, as well as having a united community that would help each other. After considering the arguments from both Degler and Brogan, I understand both of their ideas, and see that this reason also contributes towards why there has been so much disagreement over the effects of the New Deal. From the evidence that I have already given, you can see why there has been so much disagreement over the effects of the New Deal in the US. The New Deal marked a major turning point in the system of government that operated in America, and the economic policy that the new system of government adopted. It also marked a major turning point in the way government was run, as the Executive branch of government gained more power than the others, (Congress and the Supreme Court). Also, people saw the New Deal in two ways: as being revolutionary or evolutionary. Some people thought that the New Deal was a radical change, while others thought that it simply followed on from what the Progressives did in America, and referred to it as being evolutionary. However, the biggest reason why there has been disagreement over the New Deal's effects is because of the intervention of the war. The Second World War meant that people could not clearly see if the New Deal had been a success or a failure. As no clear answer was evident, people disagreed over how much the New Deal actually did for America. Also, as FDR died before he finished his fourth term in office, people disagreed over if the New Deal would have gone on to be a success or not, as there were two years left in which FDR could have made a lot of changes. The verdict is still undecided. Pratik Vats 10T ...read more.