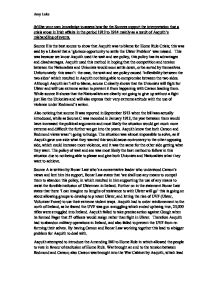 Use your own knowledge to assess how far the Sources support the interpretation that a crisis arose in Irish affairs in the period 1912 to 1914 mainly as a result of Asquiths mishandling of events.

(b)Use your own knowledge to assess how far the Sources support the interpretation that a crisis arose in Irish affairs in the period 1912 to 1914 mainly as a result of Asquith's mishandling of events. Source E is the best source to show that Asquith was to blame for Home Rule Crisis; this was said by a Liberal that a 'glorious opportunity to settle the Ulster Problem' was missed. This was because we know Asquith used the wait and see policy, this policy has its advantages and disadvantages. Asquith used this method in hoping that the competition and tension between the Nationalists and Unionists would soon settle down, or be sorted by themselves. ...read more.

Asquith knew that both Carson and Redmond views wasn't going to budge. The situation was almost impossible to solve, as if Asquith gave one side what they wanted this would cause controversy to the other opposing side, which could increase more violence, and it was the same for the other side getting what they want. The policy of wait and see was most likely the best method to follow in this situation due to not being able to please and give both Unionists and Nationalists what they want to achieve. Source A is written by Bonar Law who's a conservative leader who understood Carson's views and lent him his support, Bonar Law states that 'we shall use any means to compel them to abandon this policy, in which resulted in him supporting the use of any means to resist the forcible inclusion of Ulstermen in Ireland. ...read more.

Therefore Asquith had to abandon military operations in Ireland, and also failed to prevent the UVF from re-forming their selves. By having Carson and Bonar Law working together this lead to a bigger problem for Asquith to deal with. Asquith attempted to introduce the Amending Bill to Home Rule in which allowed the people to vote in favour of exclusion of Home Rule. War brought an end to the tension between Redmond and Carson; also Carson was brought into the War Cabinet by Asquith, which lead to various splits in the Irish Nationalist movement. The Irish Nationalists now become Irish Volunteers under the influence of Redmond. There was also more extreme groups emerge which were the Irish Citizen Army, which made an alliance with Patria Pome and helped plan the easter rising which happened in the year 1916. ?? ?? ?? ?? Amy Lake ...read more.