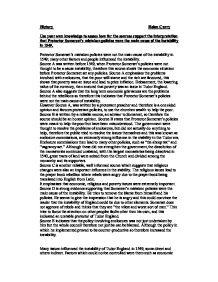 Use your own knowledge to assess how far the sources support the interpretation that Protector Somersets mistaken policies were the main cause of the instability in 1549.

Use your own knowledge to assess how far the sources support the interpretation that Protector Somerset’s mistaken policies were the main cause of the instability in 1549.

Source A was written before 1549, when Protector Somerset’s policies were not thought to be a cause instability, therefore this source shows the economic situation before Protector Somerset set any policies. Source A emphasises the problems involved with enclosures, that the poor will starve and the rich are favoured, this shows that poverty was an issue and lead to price inflation. Debasement, the lowering value of the currency, then ensured that poverty was an issue in Tudor England. Source A also suggests that the long term economic grievances are the problems behind the rebellions so therefore this indicates that Protector Somerset’s policies were not the main cause of instability.

However Source A, was written by a protestant preacher and therefore is a one sided opinion and favours protestant policies, to use the churches wealth to help the poor.

Source B is written by a reliable source, an advisor to Somerset, so therefore the source should be an honest opinion. Source B states that Protector Somerset’s policies were meant to help the poor but have been misunderstood. The government were thought to resolve the problems of enclosures, but did not actually do anything to help, therefore the public tried to resolve the issues themselves and this was known as enclosure commissions, an extremely strong influence in the stability in the Tudor era. Enclosure commissions then lead to many other policies, such as “the sheep tax” and “vagrancy act.” Although these did not strengthen the government, the dissolution of the monasteries continued unabated, with the largest monasteries being dissolved in 1540, great tracts of land were seized from the Church and divided among the monarchy and its supporters.

Source C is another reliable, well informed source which suggests that religious changes were also an important influence in the stability. The religious issues lead to the prayer book rebellion where rebels were angry due to the prayer book being translated into English from Latin.

It emphasises that economic, religious and poverty issues were extremely important.

Source D is strong evidence supporting that Somerset’s mistaken policies were the main cause of the instability. He tries to remove the blame from himself and his policies. He seems to give the impression that he is angry and this could convince the reader that the instability of England could be due to other elements. Somerset does not approve of rebels and thinks that they are “the vilest and worst sort of men.” This tries to focus the attention on other peoples faults other then his own, and this indicated an unstable protector of Tudor England.

Source E indicates that the policy involving enclosures was not just undertaken by him but the whole council therefore not just be can be blamed. Although the policy in which he implemented proved to be counter-productive so therefore increased the instability.

Many issues influenced the instability of Tudor England in 1549, some direct and others indirect. Factors which could not be controlled were them such as economic issues, due to bad harvests and the debasement. Many illnesses were highly contagious, for example sweating sickness, which made an impact on stability as epidemics stop people taking part in their daily life’s, jobs and the country falls into economic depression.

However enclosures and class divisions had a direct impact on the stability and Somerset’s policies against these, were unsuccessful and made the country more unstable. Commission on enclosures, is a policy in which the population where made to think that the government would sort out the issue, but they had a laissez faire attitude and therefore the public thought that it was their responsibility to respond. However this magnified divisions from the poorer to richer statuses – where the richer became richer and the lower statuses became vagrants.

Therefore I feel that Protector Somerset’s mistaken policies were not the main cause of instability in 1549.