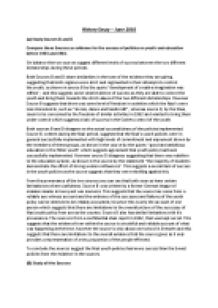 Use your own knowledge to assess how far the sources support the interpretation that the Nazis and the German Democratic Republic pursued the same aims towards youth and education. 70 marks

﻿History Essay ? June 2010 (a) Study Sources B and D Compare these Sources as evidence for the success of policies on youth and education before 1933 and 1963. On balance the two sources suggest different levels of success between the two different dictatorships during these periods. Both Sources B and D share similarities in the tone of the evidence they are giving, suggesting that both regimes were strict and regimented in their attempts to control the youth, as shown in source B by the quote ?development of creative imagination was stifled.?, and this suggests some small evidence of success as they are able to control the youth and bring them towards the strict values of the two different dictatorships. However Source B suggests that there was some level of freedom in activities which the Nazi?s were less interested in, such as ?stories, dance and handicraft?, whereas source D, by the Stasi, seem to be concerned by the freedom of similar activities in 1962 and wanted to bring them under control which suggests a lack of success in the Soviets control of the youth. Both sources B and D disagree on the actual successfulness of the policies implemented. ...read more.

This suggests that he wanted the German youth to be devoid of creativity and work just in the interest of the state. This is backed up by source B, a source by a leader of the BDM, which suggests that the ?creative imagination was stifled?. This shows that Hitler was able to implement this youth policy through the BDM and the Hitler youth. These policies and aims compare well with the GDR?s aims and policies towards youth. Source C, a Youth law implemented by the GDR in 1950, states that the GDR wanted to create a ?younger generation that was educated, physically sound, strong and progressive?. This is similar to the Nazi?s aims to create a ?dominating? youth and this can be seen as the Nazis and the GDR pursuing similar youth policies. Source C also goes on to talk about ?participation in the life of the state and society?. This suggests similarities to the Nazi aims in source A suggesting they both want the youth to be obedient and ready to serve the state and the community in their respective periods. This idea is further backed up by source E which suggests that the GDR?s governments aim was ?to produce obedient subjects rather than intellectually active citizens? this ...read more.

can be seen as a reliable account as it was for the GDR government to see only, which suggests that it will be a truthful account on the policy of the GDR towards youth and education. The final source, which is source E, comes from a modern historian. This suggests that the source can be seen to give a reliable balanced assessment of the policy of the GDR towards youth and education as they have been able to evaluate all the evidence and come to a conclusion on the facts. To conclude, on balance the sources suggest and overwhelming similarity in the aims of the two governments in their aims towards education and youth. Both governments were one party dictatorships which controlled the youth through police states, the Gestapo and the Stasi (as shown in source D), and pursued the same aims of creating a physically strong, obedient youth ready to work in the interest of the state. The only real difference between the two different governments was the ideology behind the youth and education movements. With the Nazi?s focusing on a racially pure classless community (volksgemeinschaft) while the GDR were aiming to create a youth with class warfare, with the event of the cold war during the period. ...read more.