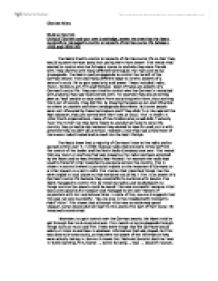 Using all Sources and your own knowledge, assess the view that the Nazis successfully managed to control all aspects of German social life between 1933 and 1939

Study all Sources Using all Sources and your own knowledge, assess the view that the Nazis successfully managed to control all aspects of German social life between 1933 and 1939 [70] The Nazis tried to control all aspects of German social life so that they would support the Nazi party thus giving them more power. This meant they wanted to control who the followers spoke to and who they were friends with. They did this with many different techniques; the main one being propaganda. The Nazis used propaganda to control the beliefs of the German people. The used many different ways to control aspects of a person's social life to gain popularity and power. These included: radio, music, literature, art, film and festivals. Most of these are aspects of a German's social life. They also tried to control who the German's interacted with and who they had relationships with. For example they would portray Jews as 'bad' people to stop others from socialising with them, thus pushing them out of society. They did this by showing the Jews as evil and influential to others on posters and other propaganda documents. But some people were not influenced by these techniques and if they didn't up rise against the Nazi takeover, they just carried with their lives as usual. ...read more.

Source D shows this 'National Socialist doctrine' was in 'every painting, film, stamp..., public building..., toys..., people's houses, in tales and costumes..., songs..., poems..., in schools' and 'even in household goods.' This source shows that this propaganda was literally everywhere , people could not get away from it. Therefore because it was everywhere the Germans would have sub-consciously taken in all of these things, and started to believe and support the Nazis. Source D also suggests how successfully they did this 'everyone played a part. Discipline, obedience, self-sacrifice, loyalty, duty... The penetration of Nazi culture into every sphere of social life never ceased.' This suggests that this technique worked; everyone was 'indoctrinated' by the Nazis and supported them. They did whatever they could for their country and Furher. However this source could be questioned as it was written in 1992, therefore the author: P. Adam, was not there at the time and the information he may have gathered may be false. In contrast to this as it is a book purely on the Nazis: 'The Arts of the Third Reich' the author would've researched for the book a lot. He would have made sure that all information was from a reliable source and that it was a true as possible. Both source B and D speak about the response to the Nazi propaganda. ...read more.

This shows that although the Nazis were successful in controlling German social life, they were unsuccessful in gaining true followers. In contrast to Source C, Source B speaks how 'No one else in the caf� listened to Adolf Hitler' when his speech was played on a loud speaker. This shows the Nazis successfully controlling this part of the population's social life. But it also suggests that some of the public were not swayed but this, and they just chose to go on with their lives a usual, and ignoring the changes around them. In conclusion, Nazis did control almost all aspects of a German's social life. They did this to gain popularity and more followers. Through controlling a German's social life they were able to indoctrinate them, with the thought that the Nazi party was the best for the country, and to make them become a follower of them. Furthermore, the more fans they gained the more of the German population would follow their example. Overall the Nazis were successful in controlling all aspects of a German's social life, which is shown in source D. In which a modern historian describes how 'National Socialist doctrine' was in literally every part of German social life. Although this shows they were successful in controlling the social life, it does not show whether this domination actually swayed the public into following the Nazis. ?? ?? ?? ?? Charlotte Bilton ...read more.