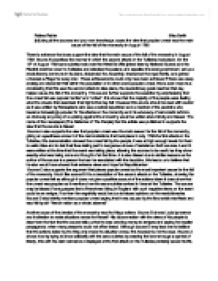 Using all the sources and your own knowledge, asses the view that popular unrest was the main cause of the fall of the monarchy in August 1792

Fatima Rahim Miss Smith (b)Using all the sources and your own knowledge, asses the view that popular unrest was the main cause of the fall of the monarchy in August 1792 There is evidence that does support the view that the main cause of the fall of the monarchy in August 1792. Source B describes the manner in which the second attack on the Tuilieries took place. On the 10th of August 1792 sans-culottes took over the H�tel De Ville joined later by National Guards and the F�d�r� marched down to Tuilieries and attacked the palace, and expelled the local government, set up a revolutionary commune in its place, disbanded the Assembly, imprisoned the royal family, and gained universal suffrage for every man. These achievements could only have been achieved if there was deep anxiety and discontent felt within the population or in other words popular unrest, this is even more true considering that this was the second attack to take place, the revolutionary goals reached that day helped cause the fall of the monarchy. This source further supports the assertion by emphasising that the unrest felt was popular-"entire" and "united", this shows that the majority of the people were feeling what the crowds that exercised their rights that day felt. ...read more.

Source D also briefly mentions popular unrest saying that it was caused by the Brunswick manifesto and was felt by all- "french nation as a whole, alarmed". Another cause of the demise of the monarchy was the Kings actions. Source D shows Louis ignorance and inclination to make situations worse for himself. His disconnection with the views of his people is clear form the fact that the source tells us that he was sending money to emigres and paying for royalist propaganda, when many peasants could not afford bread. Although source D may lead one to believe that the actions taken by the King only made his situation worse, this however is not the case. Source A shows how by trying to show solidarity with the sans-culottes by wearing the bonnet rouge a symbol of liberty, this with his calm demeanour displayed at the first attack on the Tuileries probably saved his life, as it was a public display of him agreeing with the constitution . However it is not because of the Kings correct actions that make the Kings actions a cause of the fall of the monarchy, it is his lack on actions in some cases or the wrong ones. Source A also shows what he did wrong that deeply angered the people. ...read more.

This in turn caused the following events;on the 3 August the Mayor of Paris went to the Legislative Assembly demanding the removal of the monarchy. When the Assembly refused him it finally persuaded many that a rising was necessary. Source D was written by a modern historian many years after the event took place, this increases the reliability of the source as it has the advantage of hindsight and the fact that the author is a historian backs up points made as they would have had to be researched and cross examined and scrutinise, it also can be said that the source is complete as it discusses many reasons for the demise of the monarchy, and there is no reason for it to be biased as the historian would have nothing to gain from being so, unlike other sources. I conclude in writing that I believe that popular unrest was not the main reason for the fall of the monarchy, it was a combination of the factors mentioned above that created situations for the revolution to take place. Popular unrest could be considered to be the main cause, however popular unrest would not have happened if it was not for the Kings unwise actions,the war or radical clubs promoting the need for the dethronement of the King. From all the sources D is the most useful as it is the most complete and reliable. ...read more.