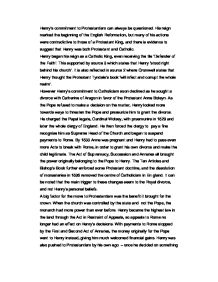 Using all the sources, and your own knowledge, assess the extent to which Henry VIII was committed to Protestantism.

Henry's commitment to Protestantism can always be questioned. His reign marked the beginning of the English Reformation, but many of his actions were contradictive to those of a Protestant King, and there is evidence to suggest that Henry was both Protestant and Catholic. Henry began his reign as a Catholic King, even receiving the tile 'Defender of the Faith'. This supported by source 3 which states that Henry 'stood right behind his church'. It is also reflected in source 2 where Cromwell states that Henry thought the Protestant Tyndale's book 'will infect and corrupt the whole realm'. However Henry's commitment to Catholicism soon declined as he sought a divorce with Catherine of Aragon in favor of the Protestant Anne Boleyn. As the Pope refused to make a decision on the matter, Henry looked more towards ways to threaten the Pope and pressurize him to grant the divorce. He charged the Papal legate, Cardinal Wolsey, with praemunire in 1529 and later the whole clergy of England. He then forced the clergy to pay a fine recognise him as Supreme Head of the Church and began to suspend payments to Rome. ...read more.

The abuses led to some inadequate clergy which opposition groups like Lollards and Humanists highlighted. They believed that churches need reforming to reduce the simony, nepotism, absenteeism and ignorance. European reformers lie Luther were also influencing the educated classes in England and anti-Papalism also grew. People with a strong sense of national identity resented the foreign power of the Pope having control I England, and Henry was able to exploit this to transfer the power to himself and changing to an Erastian church. Henry may have realized the need for reform in some areas, so even though anti-clericalism was not as widespread as traditional historians have thought, he still used the anti-clerical feelings to steadily remove the power and privileges of the clergy. Some evidence to show Henry was not really committed to the Protestant belief can be found in source 1 and 2. Source 1 is and extract from Tyndale's Obedience of a Christian Man. Tyndale was a Lutheran and Henry's reaction to the book is described in Cromwell's letter in source 2. ...read more.

It can therefore be said that Henry's true religion might not have a decisive from anyone other than himself. He had hung Catholics for treason and burnt Protestants for heresy. He passed many reforming laws and then reversed some of the doctrine in later years. He took both Catholic and Protestant wives and his actions seemed to correspond with the religion of his wife at the time. Some historians have drawn from this that Henry was an opportunist, reforming and changing his mind as time went on and taking opportunities to give himself more power as they appeared. Certainly he did not leave a definite religion when he dies, and he did seem to have taken doctrine from both Protestantism and Catholicism which were beneficial to the monarch and put them together, but he did have unmistakably Catholic beliefs in Mass and transubstantiation. Overall I would conclude that Henry was only committed to Protestantism to a certain extent as long as it was beneficial to him, but he was in no way fully committed. ...read more.

The student answers the question very well because the essay is balanced between the two viewpoints. You have to address both sides of the argument in order to reach high marks because it shows that you are thinking widely enough ...

The student answers the question very well because the essay is balanced between the two viewpoints. You have to address both sides of the argument in order to reach high marks because it shows that you are thinking widely enough to understand that there is more than one point of view on every historical event. The student seems to devote one paragraph to the argument for Protestantism and the next to the argument for Catholicism: the essay could be improved even more by putting all of the arguments on one side together in the first half of the essay, and then all of the other side of the argument in the second half. This would make it easier for the examiner to see that you are addressing both sides, and it would also show that you can organise your information. The introduction is excellent because it provides a short summary of the arguments for and against, which means that the examiner is instantly in no doubt that the student is aware of alternative points of view.

The student appears to use three sources, but it is unclear from the question how many sources there are. If the question asks for it, it is important to use all of the sources provided to you, as the examiners are looking for students who can combine their own analysis with what other people have said about the topic. This student is particularly good at writing the words of the source into their own essay by using quotation marks, such as "supported by source 3 which states that Henry Ã¢â‚¬Ëœstood right behind his churchÃ¢â‚¬â„¢." This is excellent because it shows that the student has the knowledge and understanding to make a point of their own, but also understands the source enough to know which few words are the most relevant. It would also be useful to bring in the names of the people who have written the sources - for example "Smith argued that..." - because it shows that you have engaged with the sources and are not just skim reading them to find a vaguely relevant phrase. However, at some points the essay starts to tell a story rather reach judgements. My teacher used to say that a good way to see if you are doing this is to see if you start sentences with "And then" or "He then" or something similar: other than the first and last sentence, most of the third paragraph tells a story, and the student falls into the "He then" trap by saying "He charged the Papal legate, Cardinal Wolsey, with praemunire in 1529 and later the whole clergy of England. He then forced the clergy..." It would be better to try and summarise this information into a sentence if possible, then devote the rest of the space to saying why it happened and how significant the effects were. This would show that you can look deeper than the surface and understand the causes and effects of things, rather than just details of what happened. However, the student demonstrates the ability to do this at other points in the essay: in "He also revised the BishopÃ¢â‚¬â„¢s Book with the KingÃ¢â‚¬â„¢s Book he wrote himself which is perhaps the best way to found out what he truly thought" the first half of the sentence is evidence while the second half explains why it is significant. It is important to keep this analysis up throughout the essay because it proves that you can apply it to all of the different events and interpretations you will discuss, and you aren't just an expert in one area. The conclusion is excellent as it brings together the consideration of different interpretations and shows the examiner a balanced judgement can be made after considering all of the evidence.

The spelling, grammar and punctuation is generally good, although some words are spelt incorrectly - in "Evident to support how Henry was Catholic...", "evident" should be "evidence". It is not necessary to have perfect spelling but if the examiner spends less time trying to work out what you mean, then they can spend more time assessing the knowledge you have revised or the arguments you have created. The essay would also benefit from more technical vocabulary: words like "cause" and "consequence" often appear in mark schemes, and dropping them in would show a strong understanding of why historical events happen. For example, instead of "...by ensuring he had a Protestant upbringing Henry made sure that Protestantism would live on after his death", the student could say "Henry caused Protestantism to live on...". That said, this is a good essay with some features that would score high marks.