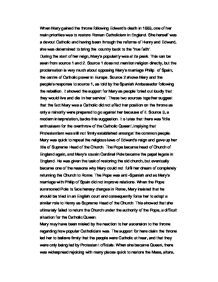 Using all the sources, and your own knowledge, assess the extent to which Marys attempts to restore Roman Catholicism in England between 1553 and 1558 were successful.

When Mary gained the throne following Edward's death in 1553, one of her main priorities was to restore Roman Catholicism in England. She herself was a devout Catholic and having been through the reforms of Henry and Edward, she was determined to bring the country back to the 'true faith'. During the start of her reign, Mary's popularity was at its peak. This can be seen from source 1 and 2. Source 1 does not mention religion directly, but the proclamation is very much about opposing Mary's marriage Philip of Spain, the centre of Catholic power in Europe. Source 2 shows Mary and the people's response to source 1, as told by the Spanish Ambassador following the rebellion. It showed the support for Mary as people 'cried out loudly that they would live and die in her service'. These two sources together suggest that the fact Mary was a Catholic did not affect her position on the throne as only a minority were prepared to go against her because of it. ...read more.

Being extremely Catholic she was determined to punish the heretics and by this she hoped to set and example to the people and hence stamp out Protestantism. One of the key figures burnt at the stake was Archbishop Cranmer, who allegedly recanted but was stilled not spared. Over 200 were burnt during Mary's 5 year reign, a total greater than those burnt by the Spanish Inquisition, and was very much counterproductive. Many common folk had been indifferent about religion, but this sudden increase in persecution led them to look more closely at the new religion which so may were willing to die for. By creating martyrs Mary ensured that Protestantism became much more prominent with more people taking notice of it. Even the Catholic population disliked the persecution, as they did not like seeing people die such a painful death for their beliefs. It also made it much easier for Elizabeth to impose a new Church Settlement, as Mary's religious policies were so unpopular. Foxe's Book of Martyrs, a bestseller during Elizabeth's reign, helped to more firmly establish Elizabeth's position by creating the image of Bloody Mary, and by her extreme religious persecutions Mary's name was to be tarnished forever. ...read more.

This ensured that for a period of around 20 years the monarch had been in favour of reforms (this is questionable for Henry but he did ensure that the country did not return to Catholicism). Mary's reign lasted only five years, not long enough for her reforms to take root. The lack of a Catholic dynasty meant that many of the changes could be quickly undone when the Protestant Elizabeth came to the throne, resulting in the ultimate failure of her restoration. Overall, Mary's restoration of Catholicism can only be called a success within her lifetime. England was very much Catholic during her reign, largely due to her determination to make sure her country followed her faith. However even whilst she was alive there were significant failures, such as the failure to restore monasteries and chantries and conflicts with the Pope mainly because of her Spanish marriage. The biggest failure I think was her failure to produce and heir to continue her legacy. After her death the restoration stopped and was very much reversed by Elizabeth. Hence with hindsight and viewing the long term results, Mary's restoration to Catholicism had limited success during her reign and all but passed away with her. ...read more.