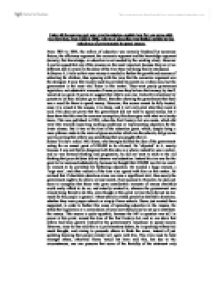 Using all the sources and your own knowledge, explain how far you agree with the view that, from 1833 to 1846, reform of education was limited mainly by the reluctance of governments to spend money.

Using all the sources and your own knowledge, explain how far you agree with the view that, from 1833 to 1846, reform of education was limited mainly by the reluctance of governments to spend money. From 1833 to 1846, the reform of education was severely hindered by numerous factors; the efficiency argument, the economic argument and the knowledge argument (namely, that knowledge, or education is not needed by the working class). However it can be argued that any of the reasons are the most important, because they are all so different, but all crucial to the delay of the Ten-Hour Act being finally introduced. In Source A, it tells us that more money is needed to further the growth and success of schooling for children, thus agreeing with the view that the economic argument was the strongest. It says that money must be provided by parents as a token sum, but the government is the most vital factor in this matter. They want purely government legislation, not substantial amounts of money since they believe that money, by itself, would do no good. It seems to suggest that reform was also limited by reluctance by parents to let their children go to school, therefore showing the government that there was a need for them to spend money. ...read more.

This view must be held amongst others, otherwise Hume would not have said this, but due to the circumstances, one can presume that some of the fervidity of the statement only comes from him speaking in a debate, although he could well have prepared what he planned to say far in advance. Source C, in contrast, is by William Cobbett, who like Hume was also a radical, but unlike Hume, thought that the grant should not be introduced in any amount. Cobbett had bizarre views for the time, and even now is seen as eccentric. He was a fervent Tory radical, who believed in keeping the old traditional ways, but at the same time encountered many problems in his life, such as being imprisoned for libel, and at this time in his life was commented upon by Macaulay as being insane. Cobbett was not so much an MP of the era, for he did not believe in self-help, and more believed that one should only need knowledge that is relevant for one's own profession, and so education was not needed. If we take this source as being the norm, you can only presume that lack of reform of education was only due to the ruling classes and the middle class not actually deeming it necessary in the first place. ...read more.

However, like the other sources, none of them mention other factors which also limited reform of education, such as the problem with religion, with the societies, with the physical administration, and with the simple dislike of having to send one's children to school, and missing out on an income from them. This extract cannot be taken as the truth, because it is so biased against the government that was actually reforming education slowly and surely. When it was written in April 1834, it underestimated the future reforms that were to be carried out until 1846, and which were to eventually succeed in opening up education to most children, with the aid of many other Acts and Bills. These sources show that the government was a key factor in limiting the reform of education, but there were also many other problems with introducing it. It was not the most important, but equally as important as other factors. The government did continue to pass reforms, despite much opposition, and so by 1846, one can say that the government not longer hindered as much the progression of the spread of education. ?? ?? ?? ?? ...read more.