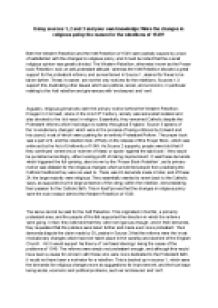 Using sources 1, 2 and 3 and your own knowledge: Were the changes in religious policy the reason for the rebellions of 1549?

﻿Using sources 1, 2 and 3 and your own knowledge: Were the changes in religious policy the reason for the rebellions of 1549? Both the Western Rebellion and the Kett Rebellion of 1549 were partially caused by a lack of satisfaction with the changes to religious policy, and it must be noted that the overall religious opinion was greatly divided. The Western Rebellion, otherwise known as the Prayer book Rebellion, took an anti-protestant attitude, whereas the Kett Rebellion showed a great support for the protestant reforms, and as mentioned in Source 1, desired for these to be taken further. These, however, are not the only motives for the rebellions. Sources 1-3 support this, illustrating other issues which are political, social, and economic, in particular relating to the Kett rebellion and grievances with ?enclosures? and ?rent?. Arguably, religious grievances were the primary motive behind the Western Rebellion. It began in Cornwall, where in the mid-16th Century, society was somewhat isolated and also devoted to the ?old ways? in religion. ...read more.

They essentially wanted to revert back to the Catholic ways, as supported by the large presence of the clergy within the rebellion, demonstrating their passion for the Catholic faith. This in itself proves that the changes in religious policy were the main reason behind the Western Rebellion of 1549. The same cannot be said for the Kett Rebellion. This originated in Norfolk, a primarily protestant area, and the people of Norfolk supported the direction in which the reforms were going. In fact, they believed that they were not rigorous enough, and in their demands, they requested that the policies were taken further and made even more protestant. Their demands dispute the claim made by D.Loades in Source 3 that the reforms were the ?most revolutionary changes which had ever taken place in the worship and doctrine of the English Church?. Yet it would support his theory of ?confused ideology? being the cause of the problems of 1549. ...read more.

Despite the majority of the demands outlined in Source 1 relating to religious grievances, the most important are the ones reflecting economic and social problems. In particular, rebels show issue with the ?enclosures? and ?rent?, requesting that rent of meadow ground and grassland be ?as they were in the first year of King Henry VII?. These problems override those of religious nature, proving that for the Kett Rebellion, changes in religious policy were not the reason for it. In conclusion, I believe that the difference in religious belief is the background for the difference in motivation for the rebellions of 1549. As the Western rebellion took place in a predominantly Catholic area, it is only natural for their issue to be with the protestant changes preventing them from practising their rituals as they would have previously. This is enforced by a lack of social, economic and political issues. Whereas the Kett rebellion could not have been against changes to religion, as it is going in the same way as them, towards total Protestantism. However, they did have the economic and social problems, which were their motivator for rebellion. ...read more.