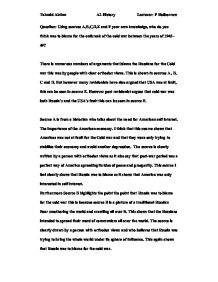 Using sources A,B,C,D,E and F your own knowledge, who do you think was to blame for the outbreak of the cold war between the years of 1945-49?

Question: Using sources A,B,C,D,E and F your own knowledge, who do you think was to blame for the outbreak of the cold war between the years of 1945-49? There is numerous numbers of arguments that blame the Russians for the Cold war this was by people with clear orthodox views. This is shown in sources A, B, C and D. But however many revisionists have also argued that USA was at fault, this can be seen in source E. However post revisionist argues that cold war was both Russia's and the USA's fault this can be seen in source F. Source A is from a historian who talks about the need for American self interest. The importance of the American economy. I think that this source shows that Americas was not at fault for the Cold war and that they were only trying to stabilise their economy and avoid another depression. The source is clearly written by a person with orthodox views as it also say that post-war period was a perfect way of America spreading its idea of peace and prosperity. ...read more.

This clearly shows that the Russia was to blame for the Cold war this is because of when Schlesinger stated that Stalin wanted world domination this shows that America only countered to stop the world from falling into the hands of Stalin. Furthermore in Source C it firstly says that America provoked Russia but however it quickly moves to establish the point that the USA was responding to a range of dangers from the Soviets for e.g. the Iron Curtain which Churchill spoke about. Source C is also a clear orthodox view as it shows that USA only reacted to Russia initial actions. It also say that the USA's reaction was also a response to the results of the Second World War. Furthermore other facts that can be said that shows that Russia started the Cold war was the fact of its Salami Tactics and how it brought down many eastern European countries also the Czechoslovakian coup and the infamous death of Czech Patriot Jan Masuryk and also The Berlin Blockade. ...read more.

This post revisionist picture indicates that may be both the superpowers were at fault because they both seemed to want to bring counties into its sphere of influence the post revisionist view is what most neutral see as the correct view this is because if you weigh up all the actions between 1945-49 such as The Marshall plan, Truman doctrine and Berlin airlift vs. the Salami Tactics, Soviet pressure on Iran and the Berlin blockade then you can see that they just provoked each other. In conclusion I feel that the orthodox and revisionist view both highlight key points and show faults of the other sides but I feel that the post revisionist is the most accurate as it shows that both camps were at fault for the Cold war. This is because both the USA and the Russians had done things to accredit them with the blame of the cold war. Finally I believe that the cold war was a bilateral thing and only lasted so long because of both of the camps lack of negotiation. ?? ?? ?? ?? Tahmid Akthar A2 History Lecturer: P Holborrow ...read more.