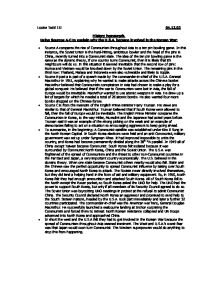 Using Sources A-C to explain why the U.S.A. became involved in the Korean War.

Louise Todd 11I 04.12.02 History homework. Using Sources A-C to explain why the U.S.A. became involved in the Korean War: * Source A compares the rise of Communism throughout Asia to a ten pin bowling game. In this instance, the Soviet Union is the hard-hitting, ambitious bowler and the head of the pins is China, recently turned into a Communist state. The idea of the ten pin bowling game is the same as the domino theory, If one country turns Communist, then it is likely that it's neighbours will do so. In this situation it seemed inevitable that the second row of pins: Burma and Vietnam would be knocked down by the Soviet Union. The remaining pins in the third row: Thailand, Malaya and Indonesia were also vulnerable and likely to topple. ...read more.

The English Prime Minister compares the Communism in Korea, to the way Hitler, Mussolini and the Japanese had acted years before. Truman said it was an example of the strong picking on the weak and an example of democracies failing to act on a situation so encouraging aggressors to keep going ahead. * To summarise, in the beginning: A Communist satellite was established under Kim Il Sung in the North Korean Capital. In South Korea elections were held and an anti Communist, military government was set up under Syngman Rhee. It had improved impossible to unite the country, and Korea had become permanently divided along the 38th �N parallel. In 1949 all of China except Taiwan became Communist. South Korea felt isolated because it was surrounded by Communist North Korea, China and the Soviet Union. ...read more.

The Soviet Union was boycotting UNO meetings in protest at the refusal to admit Communist China. The Security Council declared North Korea an aggressor and promised to send help to the South. Sixteen nations, headed by the U.S.A. took part immediately and later a further 32 countries participated. The commander-in-chief was the American war hero, General Douglas MacArthur. He successfully launched a seabourne landing at Inchon surprising the Communists and forced them to retreat. North Korean resistance collapsed and UN troops advanced into North Korea and approached China. * In short the west and the U.S.A felt they had to get involved in the Korean War because the spread of Communism throughout Asia seemed imminent. The West and U.S.A.'s worst fear was that Japan would soon turn Communist. The Western superpowers would do anything to stop this from happening. [email protected] ...read more.