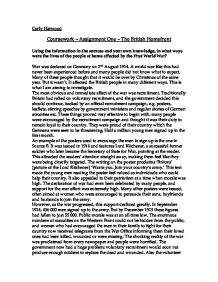 Using the information in the sources and your own knowledge, in what ways were the lives of the people at home affected by the First World War?

Carly Harwood Coursework - Assignment One - The British Homefront Using the information in the sources and your own knowledge, in what ways were the lives of the people at home affected by the First World War? War was declared on Germany on 2nd August 1914. A world war like this had never been experienced before and many people did not know what to expect. Many of these people thought that it would be over by Christmas of the same year. But it wasn't. It affected the British people in many different ways. This is what I am aiming to investigate. The most obvious and immediate affect of the war was recruitment. Traditionally Britain had relied on voluntary recruitment, and the government decided this should continue, backed by an official recruitment campaign, e.g. posters, leaflets, stirring speeches by government ministers and regular stories of German atrocities etc. These things proved very effective to begin with; many people were encouraged by the recruitment campaign and thought it was their duty to remain loyal to their country. They were proud of their country which the Germans were seen to be threatening. Half a million young men signed up in the first month. An example of the posters used to encourage the men to sign up is the one in Source B. It was issued in 1914 and features Lord Kitchener, a successful former soldier who later became the Secretary of State for War, pointing at the reader. ...read more.

There is evidence of this in Source A, written by Clive Emsley (a modern historian), in 'New Perspectives' magazine in 1990. In this secondary data he explains that 'many of the poor found themselves in permanent employment... and wages generally kept up with wartime inflation', leading to more money being saved and spent on food. Also the food that was being bought was healthier; fruit and vegetables were not rationed where as sugar, butter, beer and meat (all high-calorie foods) were. Emsley also mentions there was a decline in death rate, particularly in infant deaths, suggesting people were healthier because of their better diet. DORA was also responsible for giving the government the right to control the newspapers and other mass media that might influence people's opinions towards the war. Despite the problems of the first few months on the Western Front, the British people were only told about great British victories or heroic resistance. They were not told about the sinking of the British battleship HMS Audacious in October 1914 for example. It was not until November 1916 that the government allowed approved journalists to be at the Front. Reports focused on good news. This was censorship. If anybody resisted, forced censorship was used. If independent papers didn't publish balanced news or even anti-war articles, they were closed down (as The Tribunal was), or monitored closely (like The Daily Herald). ...read more.

It shows how women's working wasn't always welcomed. After studying the different aspects of the British Homefront during WWI, I think the lives of people at home changed greatly. Recruitment and conscription meant that millions of men joined the armed forces to fight for their country, and millions of these men were killed, wounded or went missing, leaving Britain without a generation of men. Both home and away there were positive and negative effects. Away from home there was heroic resistance but much death and horror. At home, diets and therefore health improved with rationing, and women became more independent and had more money as the government encouraged them to fill job vacancies created as men left their jobs to fight. But they did face discrimination in the workplace. And at home, due to censorship, the British public saw little of the terrible war conditions. With the help of DORA, the government could control what the public saw and how they saw it. This appears to have helped the war effort, but it annoyed many people who felt it was their right to know what was happening but were still kept in the dark. In my opinion, I think the government used their power to change people's lives for the better in the circumstances, and despite the huge numbers of casualties, the prejudice women experienced and the shocking horror of the war that was kept from the public, people at home did benefit, and as their lives changed, the war effort became as success. ...read more.