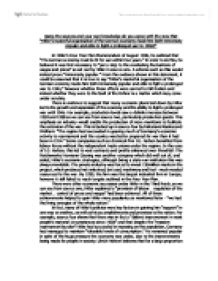 Using the sources and your own knowledge do you agree with the view that &quot;Hitler's masterful organisation of the German economy made him both immensely popular and able to fight a prolonged war to 1945?&quot;

Ulrich Herbert believes that for a large proportion of the German public, the "image of National Socialism was characterised principally by reduction of unemployment, economic boom, tranquillity and order." By 1939, official figures show that there was full employment under the Third Reich. This supports the idea of Hitler's popularity, however can also give evidence that "Hitler's masterful organisation" was not to blame. As we can see from source four, two other reasons for Hitler's increase in popularity were the "regime's monopoly of the media of information" and the "system of terror which it imposed on its subjects." For some, it is true to say that Hitler was the only option. Source three shows that people were desperate for work and food: " I'd have made a pact with the devil to get work. Hitler came along and offered me work, so I followed him." In truth, to the unemployed of 1932, the Third Reich brought prosperity of a kind, increased job opportunities and increased job security, for example in the form of the new DAF organisation. More people were attending the cinema and listening to the radio, showing an increase in consumer goods. From the point of view of the middle classes, Hitler offered security from the Communist menace and a declining crime rate, a sure piece of evidence that Hitler's popularity was widespread. ...read more.

By 1939, the regime's leaders knew that a "serious economic crisis was just around the corner." In the view of historian Tim Mason, economic problems within Germany eventually led to the war itself. Therefore, Germany had virtually no choice as to whether to fight the war or not. On the side of popularity, Mason and other Marxist historians argue that within the Third Reich, the workers were losers, kept in place by repression and propaganda, in which the prospect of benefits was fully exploited. Despite increased job opportunities and security, there were pitfalls, as workers had to endure longer working hours and less freedom. For the middle classes, the pressure to conform, monotony of party parades and harassment for donations was resented. Hitler in some ways proved to be unpopular. In spite of the opinion of many that Germany under Hitler was kept in place largely by repression and propaganda, weighing up the evidence it can in fact be said that his popularity very often stemmed from his promises or achievements within the Third Reich. As for whether "Hitler's masterful organisation of the economy made him immensely popular and able to fight a prolonged war to 1945," Hitler did succeed in implementing a massive rearmament programme, however, as is evident, his preparations would in the end not be enough to enable Germany to emerge triumphant from the war. ...read more.