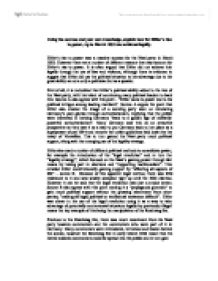 Using the sources and your own knowledge, explain how far Hitler(TM)s rise to power, up to March 1933 was achieved legally

Using the sources and your own knowledge, explain how far Hitler's rise to power, up to March 1933 was achieved legally. Hitler's rise to power was a massive success for the Nazi party in March 1933. However there are a number of different reasons that may account for Hitler's rise to power. It is often argued that Hitler did not achieve this legally through the use of fear and violence, although there is evidence to suggest that Hitler did use the political situation to his advantage due to his great ability as not a only a politician but as a speaker. First of all, it is undoubted that Hitler's political ability added to the rise of the Nazi party, with his talent of convincing many political leaders to back him. Source A also agrees with this point - "Hitler came to power due to his political intrigue among leading members". ...read more.

However it can be said that the legal revolution was just a smoke screen. Source B also agrees with this point naming it a "propaganda gimmick" to gain much political support without the growing resentment from other parties, "making all legal, political or intellectual resistance difficult". Hitler was clever in his use of the legal revolution using it as a way to take advantage of potentially controversial situations legally by previously illegal means the key example of this being the manipulation of the Reichstag fire. Previous to the Reichstag fire, there was much resentment from the Nazi party towards communism and the communists who were part of it in Germany. Many communists were intimidated, terrorised and beaten behind the scenes, however the Reichstag fire in early March 1933 meant that the hatred towards communism could be spread into the public and in turn gain further support for the party. ...read more.

This first law benefited the party, as it not only meant that the threat of a communist uprising was dimmed but also that any criticism of the party would not be in the public eye. The second point stated "the Reich Government may temporarily take over the powers of the supreme authority" in order to "restore security". This gave the Nazi's a further increase in power as meant that they could effectively rule by decree legally without any opposition if they felt it was necessary to do so. Although this could be seen as a suspension rights many people let the party get away with it due to the fear that had been created from the now "real threat" of communism. In conclusion, it is true to say that Hitler gained power through a number of then legal means, but these were only publicly accepted and tolerated due to fear that was injected into society, therefore although Hitler's rise to power was mainly achieved legally, there is no doubt that power was consolidated through the use of political violence and fear. ...read more.