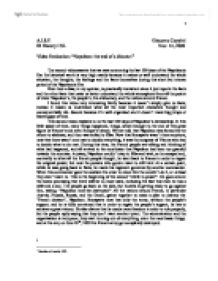 A.I.S.F. Giacomo Coppini IB History I SL Nov. 14, 2000 Video Evaluation: "Napoleon: the end of a dictator." The second videocassette that we saw concerning the last 100 days of the Napoleonic Era. Its historical worth is very high mainly because it makes us well understand the whole situation, the thoughts, the feelings and the facts themselves during this short but intense period of the Napoleonic Era. Even here a bias, in my opinion, is practically inexistent since it just reports the facts and the other facts that make us better understand the whole atmosphere from all the points of view: Napoleon's, the people's, the aristocracy, and the nations around France. ...read more.

We are told that Napoleon was forced by the others to abdicate, and then was exiled to Elba. Now that Bonaparte wasn't there anymore, now that there wasn't one man to decide everything, it was the congress of Vienna who had to decide what to do next. During this time, the French people are talking and thinking of what had happened, and all arrived to the conclusion that Napoleon had been too graceful towards the enemies. Anyway, Napoleon couldn't stay in Elba and wait, so he escaped and, contrarily to what all the French people thought, he went back to France in order to regain his original power; but now the powers who govern want to kill him! ...read more.

The people go back on his side, but Austria is getting ready to go against him, stating: "Napoleon must be destroyed!" All the nations around France, in particular Austria, Prussia, Russia, and the Dutch, gather together to make a plan to destroy the "French dictator", Napoleon. Bonaparte now has only the army, without the people's support, and he is fully convinced that in order to regain the people's support, he has to achieve a great victory. He also claims that he needs more freedom in order to rule properly, but the people reply saying that they don't want another tyrant. The administration and the organization is very poor, they start running out of everything, even the most basic things; and at the end, on June 18th, 1850 the French army got completely destroyed. 1 1 Number of words: 503. ?? ?? ?? ?? 1 ...read more.