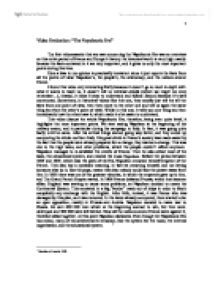 Video Evaluation: "The Napoleonic Era" The first videocassette that we saw concerning the Napoleonic Era was an overview on this entire period of France and Europe's history. Its historical worth is very high mainly because the facts contained in it are very important, and it gives us only the most important points during this time. Here a bias in my opinion is practically inexistent since it just reports the facts from all the points of view: Napoleon's, the people's, the aristocracy, and the nations around France. I found this video very interesting firstly because it doesn't go to much in depth with what it wants to teach us, it doesn't tell us minimal details (which we might not even remember...), instead, it make it easy to understand and follow. ...read more.

We start seeing Napoleon at the beginning of his military career, and in particular during his campaign in Italy. In fact, it was going quite badly until he came. After his arrival things started going way better, and they ended up conquering the whole northern Italy. His great climb in France's society was made easier by the fact that the people were already prepared for a change, they wanted a change. This was due to the high taxes, and other problems, which the people couldn't afford anymore. Napoleon managed to re-establish the credits of France. Then he also edited most of the laws, the educational system, and created the Code Napoleon. Before the period between 1805 and 1807, which was the peek of his Era, Napoleon crowned himself emperor of the French. ...read more.

England was starting to cause some problems, so Napoleon decided to create the Continental System. This consisted in a big "border" made out of ships in order to block completely any exchange with the English. After little, instead, it was France who was damaged by this plan, so it was removed. In the lands already conquered, there started to be an open opposition, mainly in Prussia and Austria. Napoleon decided to make war to Russia. He sent 600 000 men which at the beginning seemed to win, but then were destroyed and 500 000 were left behind. Now all the nations around France were against it, therefore allied together. At this point Napoleon abdicates. Even though the Napoleonic Era has ended, many of his achievements remained, like the system for the roads, the internal organization, and the educational system. 1 1 Number of words: 548. ?? ?? ?? ?? 1 ...read more.