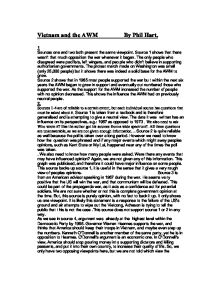 Vietnam and the AWM Sources Questions

Vietnam and the AWM By Phil Hart. 1 Sources one and two both present the same viewpoint. Source 1 shows that there wasn't that much opposition the war whenever it began. The only people who disagreed were pacifists, left wingers, and people who didn't believe in supporting authoritarian governments. The protest march made on Washington was small (only 25,000 people) but it shows there was indeed a solid base for the AWM to grow. Source 2 shows that in 1965 most people supported the war but within the next six years the AWM began to grow in support and eventually out numbered those who supported the war. As the support for the AWM increased the number of people with no opinion decreased. This shows the influence the AWM had on previously neutral people. 2. Sources 1-4 are of reliable to a certain extent, but each individual source has questions that must be asked about it. Source 1 is taken from a textbook and is therefore generalised and is attempting to give a neutral view. The date it was written has an influence on its perspectives, e.g.: 1967 as opposed to 1973. We also need to ask Who wrote it? Has the author got his sources from a wide spectrum?. All these questions are unanswerable, as we are not given enough information. .. Source 2 is quite reliable as well because the poll is taken over a long period. However we need to know how the question was phrased and if any major events which might sway peoples opinions, such as Kent State or My Lai, happened near any of the times the poll was taken. . We also need to know how many people were asked. Were there any events that may have influenced opinion? Again, we are not given any of this information. This graph was publicised, and therefore it could have major influence on some people. ...read more.

This could be Nixon trying to improve his image after all he said about the protestors and later the events at the Watergate. All these sources can contribute significantly to our understanding of the anti war movement in America but they may need to be examined in conjunction with other sources that are relative to that event. 5a) How might reporters of some Newspapers have used the two photographs to represent America's role in the Vietnam War? Pro-war supporters would not have used the two photographs (sources 12 and 13). Source 12 shows Vietnamese children who have survived an American air force napalm attack. In the centre of the photo we can see a young Vietnamese girl, Kim, who has had all of her clothes burnt off her. She is screaming out in pain. This is just one example of what the Americans did to many children across Vietnam, although Kim was lucky to have American medics to help and look after her. This source would have been effectively used by the AWM; to show the world exactly what the US were doing in the war. Source 13 shows us a picture of some Vietnamese peasants being rounded up to be shot. This was in the My Lai Massacre, which was one of the worst incidents to happen in this war. The war may be about communism, but it is really about innocent people being killed, women and children. This war makes war on the most innocent. Again, the AWM would use this source. AWM newspapers, to show the world that America's involvement in the war is hostile, and that their role is purely inhumane, could use these two sources. They were hurting and murdering the innocent. 5b) In source 19 we have two extracts from two songs by Merle Haggard. He was a supporter of the Vietnam War, and was very stereotypical of the AWM. ...read more.

The source may be reliable as he is British and so he would be less involved or effected by the war, which may have made him less bias. However source 17 directly opposes this, saying that television had encouraged a majority of television viewers to support the war. Knightly talks about a survey carried out by Newsweek in 1967. We do not know the question asked, we are not told the number of people asked, and what types of people were asked. This source may not be reliable and we would need to cross-reference with other sources before making a final decision. Source 18, a statement made by Harry Summers (colonel during the Vietnam War) in 1989. Summers doesn't think the media was responsible for American people turning against the war. He says that after 1967, public sentiment was 'win the war or get the hell out.' They wanted a result. He said that support for the government dropped once the public realised that they wouldn't win. This is a view from a colonel, someone who has a lot of experience in the military. He can't really speak for the American population, but he can for the military. This seems to be a reliable source, and it gives us a military perspective that is hard to come by. However he seems to dismiss the media's apparent part rather quickly and it is a short extract, so again it would need to be cross-referenced before passing judgement. There appears to be a great deal of evidence in relation to the question at hand but still not enough evidence to come to a firm and concise conclusion. Some sources believe that the Anti-War Movement had an impact, but others believe that there were other factors that were more important, and that the Anti-War Movement played a minor role and didn't make as great an impact as some sources imply. New evidence is always appearing so the question can never really be answered so no historian will ever really have the full answer . ?? ?? ?? ?? ...read more.