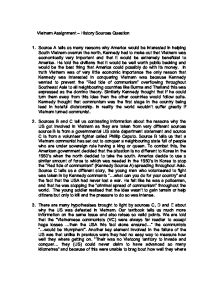 Vietnam Assignment - History Sources Question 1. Source A tells us many reasons why America would be interested in helping South Vietnam overrun the north, Kennedy had to make out that Vietnam was economically very important and that it would be extremely beneficial to America. He told the civilians that it would be well worth public backing and would be the best thing that America could possibly do with its money. In truth Vietnam was of very little economic importance the only reason that Kennedy was interested in conquering Vietnam was because Kennedy wanted to prevent the "Red tide of communism" overflowing throughout Southeast Asia to all neighbouring countries like Burma and Thailand this was expressed as the domino theory. Similarly Kennedy thought that if he could turn them away from this idea then the other countries would follow suite. Kennedy thought that communism was the first stage in the country being lead in hateful dictatorship. In reality the world wouldn't suffer greatly if Vietnam turned communist. 2. Sources B and C tell us contrasting information about the reasons why the US got involved in Vietnam as they are taken from very different sources source B is from a governmental US state department statement and source C is from a volunteer fighter called Phillip Caputo. Source B tells us that a Vietnam communist has set out to conquer a neighbouring state full of people who are under sovereign rule having a king or queen. To combat this, the American government decided that the situation is no different to Korea in the 1950's when the north decided to take the south. ...read more.

Source G is very much similar to source F in the way that maybe not all people voted and had their say. It also tells us that the American public were thinking very strongly about the situation in Vietnam. It also in not perfect it does have limits to how useful as a source it can be as it does not contain any details. The Source doesn't have any percentages and or figures or even what was voted in second place and how far behind it was. On face value the source shows that the public only had one thing in their mind. If details where contained i.e. how many votes; we could establish much more information about how strongly they felt and if their views were changing as time went on. The article published in Time magazine in January 1970 was about an incident in 1968 involving a couple of US soldiers killing a group of Vietnamese unarmed innocent women and children. The report was delayed from 1968 until 1970, there are many different reasons why the magazine would want to delay the release of such a gruesome story. One of those reasons could be that the magazine producers didn't want to make a couple of members of there own force (US) look like cold-hearted fiends. Another more probable reason is that when the story broke in 1968 the magazine delayed the production of the article because in 1968 most American citizens were very interested in the war. ...read more.

I feel that had the US won the war the author of source M wouldn't have been so inclined to jump on the television as a cause of heavy losses. I think that he or she would probably agree with the author of source M. The good citizens of America had never seen footage of this sort. They had never had such good coverage of a war, it was vastly different from that seen in World War II. This great coverage wasn't only on television, the pictures also made there way back to the people like the My Lai picture in source J. This sort of picture would also turn the American people against the war as it showed the ruthless American Soldiers at their worst. About this time there were stories that leaked from the government to the press this went someway to distress the public further. These people were now in a position were they could doubt the government and accuse them of lies with visible proof and not just rumours. In this war the added television was one step to far for the people they now knew more than they could handle and it drove them to rebel. Many US people protested against the war. The television companies were quick to jump on these as major stories and covered these events in detail. In many cases people saw the protests and decided that they felt the same way, many people joined in such protests. This spelled disaster for the government as the more protesters the quicker that they must act. ...read more.