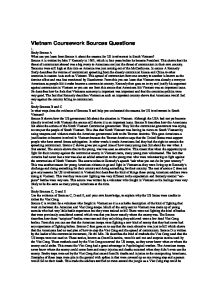 Vietnam Coursework Sources Questions 1. Study Source A What can you learn from Source A about the reasons for US involvement in South Vietnam? Source A is written by John F Kennedy in 1965, which is four years before he became President. This shows that the threat of communism abroad was a big worry to Americans not just the threat of communism in their own country. Tensions were still high at this time as America was just coming out of the McCarthy era. In source A Kennedy firstly describes the worries of communism spreading from the already communist Russia and China to other countries in eastern Asia such as Vietnam. This spread of communism from one country to another is known as the domino effect and was first mentioned by Eisenhower. From this you can learn that Vietnam was already a worry to Americans as people felt it make become a communist country. Kennedy then goes on to try and justify his argument against communism in Vietnam so you can see from this source that Americans felt Vietnam was an important issue. He describes how he feels that Vietnams economy is important was important and that the countries politics were very good. The fact that Kennedy describes Vietnam as such an important country shows that Americans would feel very against the country falling to communism. 2. Study Sources B and C In what ways does the evidence of Sources B and help you understand the reasons for US involvement in South Vietnam? Source B shows how the US government felt about the situation in Vietnam. Although the USA had not yet become directly involved with Vietnam the source still shows it is an important issue. Source B describes how the Americans felt about the actions of the North Vietnam Communist government. They felt the communist government was trying to conquer the people of South Vietnam. ...read more.

The source also does not give information on how many people were asked so it may not be that reliable but I believe it probably is as Vietnam was the most important issue at this time. Source I shows the kind of War publicity that was beginning to come across to the USA's public. It is useful for understanding why people would have begun to feel opposed to the war because it is an eye witness account of the My Lai massacre which was one of the main events that made people begin to think about what was going on in Vietnam. This kind of war publicity, along with photos and film were bound to change the views of the public as they showed the real events taking place in Vietnam and the horrific reality of the war. People were beginning to see how innocent people were being slaughtered and their friends and family who had gone to fight in Vietnam were being killed by a ferocious and usually unseen enemy. When this kind of war coverage began to come out and the American public began to see the truth about the war the majority would have felt opposed to the action that was taking place in Vietnam. 5. Study Sources G, H, I, J, K and L Use the evidence of these sources, and your own knowledge, to explain why public opinion about the war in the USA changed between 1967 and 1970. During the late 1960s the American public began to see real images of horrific scenes from Vietnam. A new kind of media was getting though and people were seeing what was happening to the young American GI's and also the treatment of the Vietnamese. Source J is a photo that many people would have seen or something similar. It was this kind of media that began to show the truth behind the war in Vietnam and the terrible treatment of the Vietnamese. ...read more.

An example of the misery felt by the soldiers is source H and I imagine many soldiers would have felt the same. Mothers wanted their sons home as they began to realise the pointlessness of the war and how horrific the deaths of the American soldiers were. Protests such as in Kent state university were taking place and more and more people were being to stop and think about how necessary this war really was. Protests came in the form of songs as well, which reached a wide variety of people. Source K is an example of this kind of song and shows how people believed Vietnam was a pointless waste of young lives and America's resources. The failures and mistakes in Vietnam were becoming more apparent. Events like Mai Lai had full media coverage and disgusted many American citizens as America had made such a terrible error. Sources I and J show how the events like Mai Lai had all kinds media coverage so people found out them very easily. The Tet offensive had resulted in the American embassy being attacked. This would have horrified many as such a thing was able to happen and the Viet Cong had reached so far into South Vietnam. Television and the media played a big part in changing peoples attitudes towards Vietnam. It showed the public what they had not been told. The deaths of the US soldier, deaths of innocent Vietnamese and the failures that of the war were all revealed. Also the war in Vietnam was costing huge amounts of money which many people felt was being wasted. Letters families received from their sons were also revealing the reality of the war. People began to stop and think about how necessary the war was and attitudes began to change. A mixture of this and the fact that many soldiers were being lost with no sign of victory resulted in great opposition to Vietnam. ...read more.