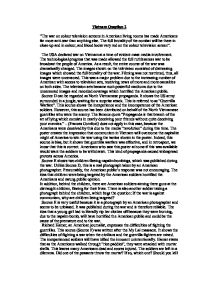 Vietnam Question 2 "The war on colour television screens in American living rooms has made Americans far more anti-war than anything else. The full brutality of the combat will be there in close-up and in colour, and blood looks very red on the colour television screen". The USA declared war on Vietnam at a time of evident mass media involvement. The technological progress that was made allowed the full ruthlessness war to be broadcast the people of America. As a result, the entire course of the war was dramatically changed. The images shown on the television consisted of distressing images which showed the full brutality of the war. Filming was not restricted, thus, all images were uncensored. This was a major problem due to the increasing number of American with access to television sets, receiving news of more and more casualties on both sides. The television sets became such powerful mediums due to the uncensored images and recorded coverage which horrified the American public. Source D can be regarded as North Vietnamese propaganda. It shows the US army surrounded in a jungle, waiting for a surprise attack. ...read more.

This is an indication of naivety of behalf of the soldiers. It seems that they were only going to Vietnam to be war heroes. They might not have known what the war was about, or even where Vietnam was. It was the fact that they wanted to show how "courageous" they were. This reinforces the idea of inexperience because they did not know the conditions or dangers of war. The repetition of the word "Nazi" in the 5th and 6th lines could be used deliberately in an emotive way, because the Nazi party was a Brutal regime which has little support. The language used by one of the soldier's friends can be interpreted as a way of justifying what happened at My Lai. This source is relatively reliable because it was written by an American soldier. However, there are elements of bias in the source and omitted factors which are very important to the subject in question. Source H is a cartoon published in the British magazine Punch in 1967. It shows the effects of President Johnson's war policy on the 'Great Society' - his vision to "feed and shelter the homeless... ...read more.

The film shows bloody scenes, which shows the full extent of the war and its consequences. This is a secondary source and is reliable. It shows both sides of the story, after all there is always "two sides to every story". However, there is no evidence of how the television influenced the premature end to the war. The film is from 1989 and the war occurred in the 1960s. Therefore, no American would have seen this film. In addition, this source is a film based on a true story. The film could be dismissed as propaganda because the directors had the benefit of hindsight while making the film. The sources discussed all indicate that the era of mass media involvement contributed to America losing the war. All the sources effectively change the minds of the American public. However, different techniques are used such as emotive language and pictures, cartoons that portray America as wasting money on Vietnam and propaganda. Other factors could have contributed to the loss of the war such as financial difficulties and conscientious objectors to the war. The Vietnamese guerrilla warfare tactic would have certainly added to the fear and help them win the war psychologically. In conclusion, the era of mass media involvement definitely contributed to the ending of the war, for "Truth is the first casualty of war". ...read more.