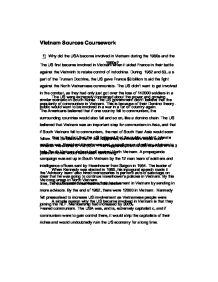 Vietnam Sources Coursework 1) Why did the USA become involved in Vietnam during the 1950s and the 1960s? The US first became involved in Vietnam when it aided France in their battle against the Vietminh to retake control of Indochina. During 1952 and 53, as part of the Truman Doctrine, the US gave France $3 billion to aid the fight against the North Vietnamese communists. The US didn't want to get involved in the combat, as they had only just got over the loss of 142000 soldiers in a similar scenario in South Korea. ...read more.

The US believed that Vietnam was an important step for communism in Asia, and that if South Vietnam fell to communism, the rest of South East Asia would soon follow. The Us believed that if that happened, communism would soon threaten the shores of the USA. If this happened, the 142000 men lost in the 3 years in Korea would have been for nothing. Due to the fact that the US believed that the public wouldn't tolerate another war, President Eisenhower sent a small group of military advisors to help South Vietnam defend itself against North Vietnam. ...read more.

By this time, the communist threat had not died down. The US started to increase their involvement in Vietnam by sending in more advisors. By the end of 1962, there were 12000 in Vietnam. Kennedy felt pressurised to increase US involvement as Vietnamese people were joining the NLF. Membership had increased by 300%. A simple reason why the US became involved in Vietnam is that they Feared communism. The USA was, and is, extremely capitalistic, and if communism were to gain control there, it would strip the capitalists of their riches and would undoubtedly ruin the US economy for a long time. ...read more.