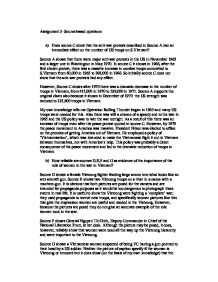 Assignment 3- Source based questions a) Does source C show that the anti-war protests described in Source A had an immediate effect on the number of US troops on S.Vietnam? Source A shows that there were major anti-war protests in the US in November 1965 and a larger one in Washington in May 1970. In source C it shows in 1966, after the first shown protest, there was a massive increase in combat troops committed to S.Vietnam from 60,000 in 1965 to 268,000 in 1966. So initially source C does not show that the anti-war protests had any effect. However, Source C shows after 1970 there was a dramatic decrease in the number of troops in Vietnam, from 415,000 in 1970 to 239,000 in 1971. Source A supports the original claim also because it shows in December of 1970 the US strength was reduced to 335,800 troops in Vietnam. My own knowledge tells me Operation Rolling Thunder began in 1965 and many US troops were needed for this. Also there was still a chance of a speedy end to the war in 1965 and the US policy was to win the war outright. As a result of this there was an increase of troops even after the peace protest quoted in source C. However, by 1970 the peace movement in America was massive. President Nixon was elected to office on the promise of getting America out of Vietnam. ...read more.

Agent Orange was also used on vegetation. It was a herbicide that could strip trees of their leaves and wipe out whole areas of greenery. IT was sprayed from planes over vast areas and was used to uncover Vietcong positions and expose the Ho Chi Minh trail. Source M supports this and shows an area of Vietnam before and after being sprayed by Agent Orange. The second picture shows a bare landscape stripped of all vegetation, showing Agent Orange was effective in it's objective. Although these chemicals were effective in their missions, they caused very bad side effects: When Napalm came into contact with humans (mainly Vietnamese civilians) it clung to the skin and burned holes into it, massively disfiguring the person. Although the US weren't too concerned with this, American TV broadcasted pictures of children hit by Napalm and the American public were horrified. Source K is a famous example of this, showing children trying to escape from US Napalm bombing. Many people disagreed with the American tactic of using chemicals to strip the jungle as is supported by Source L which talks about the criticism Agent Orange received. It destroyed food and cash crops, adding to the food shortage in Vietnam. It caused cancers and other diseases among Americans and Vietnamese alike. All these things culminated with the bad press on Napalm and were a major factor in widening the peace movement and turning the American people against the war in Vietnam. ...read more.

These sources together are a big indicator of another reason why the American public disliked the war. Sources N and P deal with the Anti-war movement specifically. In N, the headline reads 'AMERICA VOTES FOR PEACE'. This shows peace was a big bargaining tool for presidential candidates and therefore it was realised how unpopular the war was and that America should get out at all costs. Source P basically backs this up but gives more reasons, such as drug addiction and inflation for reasons why the war was so unpoplar. Whatever the reason, the consequence was that the American people went a long way to lose the war for their own country but, in their view, win the war for humanity. All the sources do help to a large extent to understand why a superpower like the United States of America failed to defeat the Viet Cong but it must be couple with my own knowledge to give it any sort of gravity. My own knowledge gives me a number of reasons why America lost the war: Largely the Peace Movement, where the American public turned against the war spectacularly and pressured the American power base to stop the war by electing Nixon, a 'peace candidate'. Russia and China supplied much needed arms and equipment to the NVA and Vietcong. The Americans were not used to the terrain and guerilla warfare but the Vietcong knew these things well. American soldiers were often young, inexperienced, homesick and prone to drug addiction. All these things contributed to America losing the war in Vietnam. BEN SELLERS. 7/1/02 ...read more.