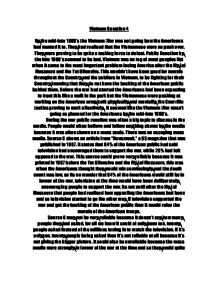 Vietnam Question 4 By the mid-late 1960's the Vietnam War was not going how the Americans had wanted it to. They had realised that the Vietnamese were no push over. They were proving to be quite a tasking force to defeat. Public Reaction by the late 1960's seemed to be bad. Vietnam was on top of most peoples list when it came to the most important problem facing America after the My Lai Massacre and the Tet Offensive. This wouldn't have been good for morale throughout the Country and the soldiers in Vietnam, to be fighting for their Country knowing that they do not have the backing of the American public behind them. Before the war had started the Americans had been expecting to treat this like a walk in the park but the Vietnamese were pushing at working on the American army both physically and mentally, the Guerrilla tactics proving to work effectively.. It seemed like the Vietnam War wasn't going as planned for the Americans by the mid-late 1960's. During the war public reaction was often a big topic to discuss in the media. People would often believe and follow anything shown by the media because it was often shown on a mass scale. There was no escaping mass media. ...read more.

Source H shows us the results of opinion polls in the USA in the 1960's. It shows us the Public's view of the important problem facing the country according to Gallup Poll results 1961-68. It says that by 1965 onwards Vietnam was the main concern, over issues such as Race, Inflation, Segregation which are all big issues. You could say this is extremly reliable because this was produced by Gallup, a very well respected and trusted poll organisation, so many people wouldn't have thought that they would produce any false facts or figures, also because the war was going so bad, much of the public did go against it and so that makes the facts and figures look correct in this source. On the other hand you could say it's quite unreliable because it doesn't give you the bigger picture. There were about 230 million people in the Country at the time and only a couple of thousand were asked, so only a tiny percentage was asked, this means that the information hasn't come from the whole Country and so could be displaying false results, this is mass media again manipulating the public now trying to turn them against the war by trying to say that the whole Country is against it. ...read more.

This report would have almost certainly have swayed the public against the War, it was so horrific that the Government had tried to keep the My Lai Massacre a secret by not releasing their reports for two years as they also knew it would be bad for public opinion., this shows they were worried about public reaction. Once this had been released then public opinion would have changed quite dramatically. Then again this may not have been very reliable as again time magazine was apart of the mass media, so it could of very easily have been changed to manipulate public opinion. It had become a very different story, from the beginning when the media were strongly in favour of the war to now where they were completely against it. Again Source J is not directly about public opinion but the delay shows the government was aware reactions were becoming negative and reports about atrocities like this would upset people and worry them about their loved ones. Altogether the sources are useful because they show public reactions were becoming negative for example in Source H and Source J which shows the government were aware of this; Source I and J help to explain why people would turn against the war because you can work out the reactions to bad news of the war would be negative. By Sean Mckinnon ...read more.