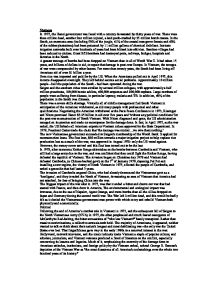 Vietnam In 1975, the Hanoi government was faced with a country devastated by thirty years of war. There were three million dead, another four million injured, a land pock-marked by 25 million bomb craters. In the South, an enormous area (including 50% of the jungle, 41% of the coastal mangrove forests and 40% of the rubber plantations) had been poisoned by 11 million gallons of chemical defoliant. Intricate irrigation networks built over hundreds of years had been blitzed into oblivion. Bamboo villages had been reduced to cinders. Giant B52 bombers had destroyed ports, railways, bridges, hospitals and factories in the North. A greater tonnage of bombs had been dropped on Vietnam than in all of World War II. It had taken 15 years, and billions of dollars in aid, to repair that damage in post-war Europe. In Vietnam, the ravages of war were compounded by other factors. For more than twenty years, the South had been living off American aid of over $1 billion a year. Even rice was imported and paid for by the US. When the Americans pulled out in April 1975, this income disappeared overnight. They left behind serious social problems. Approximately 10 million people - half the population of the South - had been uprooted during the war. Saigon and the southern cities were swollen by several million refugees, with approximately a half million prostitutes, 100,000 heroin addicts, 400,000 amputees and 800,000 orphans. Large numbers of people were suffering from disease, in particular leprosy, malaria and TB. In addition, 40% of the population in the South was illiterate. There was a severe skills shortage. ...read more.

peacekeeping forces in Somalia and Bosnia. Quite clearly, for at least a quarter of a century after the Vietnam War ended, that conflict continued to loom large in the minds of Americans. Accordingly, a new consensus among foreign policy makers, reflecting the lessons learned from the Vietnam War, became manifest: the United States should use military force only as a last resort; only where the national interest is clearly involved; only when there is strong public support; and only in the likelihood of a relatively quick, inexpensive victory. Another consensus also gradually emerged. At first, rather than giving returning veterans of the war welcoming parades, Americans seemed to shun, if not denigrate, the 2 million-plus Americans who went to Vietnam, the 1.6 million who served in combat, the 300,000 physically wounded, the many more who bore psychological scars, the 2,387 listed as "missing in action," and the more than 58,000 who died. Virtually nothing was done to aid veterans and their loved ones who needed assistance in adjusting. Then a torrent of fiction, films, and television programs depicted Vietnam vets as drug-crazed psychotic killers, as vicious executioners in Vietnam and equally vicious menaces at home. Not until after the 1982 dedication of the Vietnam Veterans Memorial in Washington, D.C., did American culture acknowledge their sacrifice and suffering, and concede that most had been good soldiers in a bad war. Yet this altered view of the Vietnam veterans as victims as much as victimisers, if not as brave heroes, was not accompanied by new public policies. Although most veterans did succeed in making the transition to ordinary civilian life, many did not. ...read more.

Rock critics viewed "Born in the U.S.A." as a bitter indictment of America's involvement in Vietnam, but many fans saw the song as an endorsement of patriotic values. After seeing Springsteen in concert, George Will wrote an admiring column, praising the star's blue-collar outfit of T-shirt and headband, which reminded Will of another pop symbol: Robert De Niro in "The Deer Hunter." Soon Reagan was on the bandwagon, praising Springsteen during a New Jersey campaign stop, saying America's future "rests in the message of hope in songs so many young Americans admire: Bruce Springsteen." Springsteen let his music speak for itself. But his use of Vietnam as a metaphor for his disillusionment with '80s Reaganomics helped inspire a new generation of socially conscious musicians. Vietnam's impact culturally in America is through films such as "Apocalypse Now and the "Deer-Hunter", and through songs such as Edwin Stars "War", and the Beatles "All you need is Love". These lasting and evocative influences amongst US culture, though steadily growing less and less, show generations that weren't alive in the 1960's and early 70's, what the war meant to different generations. But perhaps the best image to define the emotional, cultural, and physcological effect of the war, is in Washington DC, where a memorial showing three dishevelled, tired soldiers in the jungle, one Black, Hispanic, and white, are waiting for something, they are staring at the black wall with all the names of those killed or are missing. Culturally, through the mediums of Film, music and television reporting of the war, the impact on America after the war was that it's cultural effect on America has been documented and deemed as important for the change that it evoked culturally, than the war that was fought. ...read more.