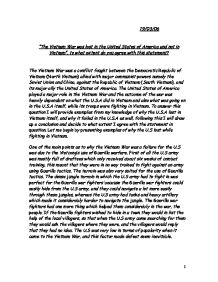 19/03/06 ''The Vietnam War was lost in the United States of America and not in Vietnam", to what extent do you agree with this statement? The Vietnam War was a conflict fought between the Democratic Republic of Vietnam (North Vietnam) allied with major communist powers namely the Soviet Union and China, against the Republic of Vietnam (South Vietnam), and its major ally the United States of America. The United States of America played a major role in the Vietnam War and the outcome of the war was heavily dependant on what the U.S.A did in Vietnam and also what was going on in the U.S.A itself, while its troops were fighting in Vietnam. To answer this question I will provide examples from my knowledge of why the U.S.A lost in Vietnam itself, and why it failed in the U.S.A as well, following this I will draw up a conclusion and decide to what extent I agree with the statement in question. Let me begin by presenting examples of why the U.S lost while fighting in Vietnam. One of the main points as to why the Vietnam War was a failure for the U.S was due to the Vietcong's use of Guerilla warfare. ...read more.

There were not many suitable targets for the U.S such as industrial targets. There was also a use of racist comments by the Americans; they would often refer to the Vietnamese people as "Gooks" which would be the same as calling a black person "Nigger". A major point which brought the U.S army crashing was that the U.S troops became increasingly demoralized during the war. This is because most of the troops sent to Vietnam were only draftees and they were also only around the age of 19. Drug use became a major problem and troops even killed their own officers, these actions are often referred to as "fragging". It gained this name because when, for example a small U.S group of troops went out for a hunting mission to find the enemy, the troops would make sure that there was a big gap between them and their officer and then they would use a frag grenade to kill their own officer, hence the name "fragging". Another point was the cost. The massive cost of the war was a major factor. In one week ten B-52 bombers were shot down, each one cost 3.4 million dollars. By 1967 the war was costing the U.S millions of dollars per day. ...read more.

With all money being harnessed from the U.S economy, the president at the time, J.F Kennedy wished to carry out social programs in an attempt to turn the U.S into a "greater society"; although these acts were noble the shear cost of the Vietnam War banished the hope that these social reforms would actually take place. The huge cost of the Vietnam War meant that there was not a cent left to spend on anything which aided the American people, this obviously aroused some protesters. In conclusion, I would like to state that I believe that the statement "The War in Vietnam was lost in the U.S.A and not in Vietnam" to be partly true. The problems faced in the U.S.A did condemn the U.S in Vietnam, but the war was still fought and lost in Vietnam. I believe that the war was lost in both the U.S.A and Vietnam. The war was not only lost in the U.S, the protests going on in the U.S just aided the fact that the U.S army faced a true "no win situation" while fighting, which condemned them to loose against their enemies. The factors from both the U.S and Vietnam merged together truly did cause the defeat in the Vietnam War for America. By Sam Arkless ?? ?? ?? ?? 1 ...read more.