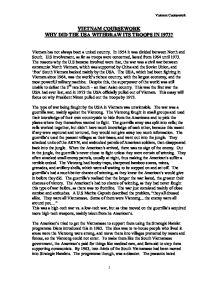 VIETNAM COURSEWORK WHY DID THE USA WITHDRAW ITS TROOPS IN 1973? Vietnam has not always been a united country. In 1954 it was divided between North and South. U.S involvement, as far as troops were concerned, lasted from 1964 until 1973. The reasons why the U.S became involved were that, the war was a civil war between communist North Vietnam, which was supported by China and the Soviet Union, and 'free' South Vietnam backed mainly by the USA. The USA, which had been fighting in Vietnam since 1964, was the world's richest country, with the largest economy, and the most powerful military machine. Despite this, the superpower of the world was still unable to defeat the 3rd rate South - an East Asian country. This was the first war the USA had ever lost, and in 1973 the USA officially pulled out of Vietnam. This essay will focus on why President Nixon pulled out the troops by 1973. The type of war being fought by the USA in Vietnam was unwinnable. The war was a guerrilla war, mainly against the Vietcong. The Vietcong fought in small groups and used their knowledge of their own countryside to hide from the Americans and to pick the places where they themselves wanted to fight. The guerrilla army was split into cells; the cells worked together, but didn't have much knowledge of each other, because this meant if any were captured and tortured, they would not give away too much information. The guerrilla's used the peasant villages as their bases, and went out into the jungle. They attacked units of the ARVN, and ambushed patrols of American soldiers, then disappeared back into the jungle. When the American's arrived, there was no sign of the enemy. Out in the jungle, the guerrilla's never chose to fight unless they were certain of winning. They often attacked small enemy patrols, usually at night, thus making the American's suffer a terrible ordeal. ...read more.

Because of the sabotage the Americans had caused to their country, the Vietnamese quickly viewed them as just another group of foreign invaders - like the Chinese, French, and Japanese before them. Even though the Vietcong were causing the same disruption, at least they were from the same villages, regions, and country as the people, and understood what the people of Vietnam really wanted. In March 1965, under 'Operation Rolling Thunder', the Americans began the bombing of North Vietnam. Its aim was to destroy the economy of the North, and stop the support for guerrillas in the South. The bombing was only intended to last for eight weeks, but instead lasted for eight years; during this time 8 million bombs were dropped, which was over three times the number of bombs dropped in the whole of WW2. The Americans expected the saturation bombing of North Vietnamese cities (such as Hanoi), to result in the North wishing for peace; the bombing actually had the opposite effect though, as it just made the North even more determined to continue. The missions were dangerous for U.S jets and B52 bombers, due to the effective civil defence systems, and defensive batteries of anti-aircraft guns including SAM (surface to air missiles). The effect of the bombing was limited, as most of Vietnam was still a rural based society, and supplies or weapons, food, medicines etc still came from China and the Soviet Union - this meant that even if the Americans destroyed some factories, they would never stop the North's supplies. The North Vietnamese used American bombing as a way of motivating their population to keep fighting, as it was a means of increasing anti-American feelings through the use of effective propaganda. They influenced strong feelings of hatred against the Americans, and told them stories about the Americans, which were often either exaggerated or lies. The more the Americans attacked, the harder the North fought back. ...read more.

Voting is extremely important, as no president in a democracy can hope to keep power if he follows a policy that is universally disliked by the electorate. Nixon had got to power by promising to get the US out of the war and securing 'peace with honour'. It was now time to deliver his promise. There was strong congressional opposition. The Left (Democratic Party) fundamentally opposed the war, whereas the right (Republican Party) fundamentally opposed losing he war. With on the ground troop numbers decreasing, the Democratic dominated congress was inevitably about to stop any further funding for the war. Nixon got the peace terms signed in January 1973 through a combination of Diplomatic and Military pressure. Some said that the 'peace with honour' had been obtained, and this was argued favourably. This was the case, as in 1973, the South Vietnamese were left with the world's fourth largest air force and an army of a million, which were equipped with the latest American technology. The Communists, in contrast, were a depleted force that was low on men, weapons, ammunition, and food. However, without the much-needed American support, it was uncertain how much longer the South of Vietnam would last. In conclusion, the USA pulled out of Vietnam in 1973, due to the fact they were fighting the wrong type of war in the wrong place at the wrong time, the public support for the war in Vietnam declined the longer it went on, politically and financially the war became a loser for both politicians and political parties in the USA, and finally the American image in the world had greatly suffered because of it's involvement in Vietnam. Many American officials had been looking to get out of Vietnam as early as 1968. The Vietnamization of the war, which was Nixon's policy, lead to the gradual removing of the US troops, until by 1973 all the US troops were out of Vietnam. The Paris peace treaty was signed, and the US involvement came to an end when the last US troops left Saigon in April 1973. Vietnam Coursework 1 ...read more.