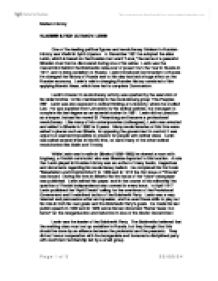 VLADIMIR ILYICH ULYANOV: LENIN One of the leading political figures and revolutionary thinkers in Russian History was Vladimir Ilyich Ulyanov. In December 1901 he adopted the alias Lenin, which is based on the Russian root word "Lena," the name of a peaceful Siberian river that he discovered during one of his exiles. Lenin was the mastermind behind the Bolsheviks take-over of power from the Tsar in Russia in 1917, and to bring socialism to Russia. Lenin introduced Communism to Russia. He changed the history of Russia and to this day has had a huge effect on the Russian economy. Lenin's role in changing Russian history consisted of him applying Marxist ideas, which later led to complete Communism. Lenin's interest in revolutionary activity was sparked by the execution of his older brother, for his membership in the revolutionary group 'The Peoples Will'. Lenin was also exposed to radical thinking at University, where he studied Law. He was expelled from University for his radical policies, but managed to complete his law degree as an external student in 1891. Lenin did not practice as a lawyer; instead he moved St. Petersburg and became a professional revolutionary. Like many of his contemporaries (colleagues), Lenin was arrested and exiled to Siberia in 1895 for 5 years. ...read more.

Lenin did not play a very prominent role in this first revolution. In the same year Lenin attended the Tampere Conference, and this is where he met Stalin for the first time. In this year Lenin also promised to further the Finnish autonomy. Lenin had a very good relationship with the Finnish people throughout his life. On October 25, 1917, Lenin led the Bolsheviks in a Socialist Revolution that would leave Lenin in control of Russia. Everything that had been set in stone about the life and culture of Russia over the past centuries would change during the course of one night. People were expecting great things, Lenin and others associated with his party, made Marx's ideas sound great. Once Lenin came to power and tried to execute his plans towards his nation things went terribly wrong for the people of Russia. The problems started with the proletariat, the people that Lenin put in charge of the nation. As common knowledge, proletariats are not the most educated people, with no knowledge of how to help run a Socialist government. So the proletariats started making decisions that would hurt the common man in Russia. Decease, hunger and even cannibalism struck over some parts of the nation, where as before in the Monarchy rule under Tsar Nicholas II, Russia was as rich in agriculture as any other country in the world. ...read more.

Based on their conclusions from Russia and how they handled the change and the horrible crimes that were committed against humanity on the part of the socialist party; other countries around Europe wanted no part of communism, and considered it a serious threat to their existence. In 1918 a female revolutionary fired 3 shots at Lenin, only one missed. He later suffered from 4 strokes which are said to have been contributed by the assassination attempt. Lenin had his third stroke on March 9 of 1923 and was no longer able to speak. Lenin died after his last stroke on January 21st 1924. Lenin was a very powerful man and leader throughout his life. He was very influential and maybe with some more thorough forethought his plans could have thrived. The Monarch system of Russia at the time needed to be changed and Lenin knew this, so he acted with great determination to change the way of Russia forever. Lenin definitely played a major role in Russian History through many activities, including the abdication of the Tsar in 1917, and achieved many of his own and his Party's goals, which could lead him to be viewed as successful and a very prominent figure in Russian History. ?? ?? ?? ?? Modern History P a g e 1 o f 3 2 3 / 0 5 / 0 4 ...read more.