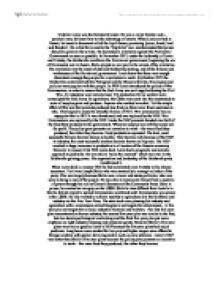 Vladimir Lenin was the Bolshevik leader

Vladimir Lenin was the Bolshevik leader. He was a clever thinker and a practical man; he knew how to take advantage of events. When Lenin arrived in Russia, he issued a document called the April theses, promising 'peace, bread, land and freedom'. He called for an end to the 'Capitalist' war, and demanded that power should be given to the soviets. He demanded a revolution against the Provisional Government as soon as possible. In November 1917, under the leadership of Lenin and Trotsky, the Bolsheviks overthrew the Provisional government, beginning the era of Communist rule in Russia. Stalin played no real part in the events of the revolution. The revolution was the result of detailed Bolshevik planning, and of the failures and weaknesses of the Provisional government. Lenin knew that there was enough discontent amongst the people for a revolution to work. By October 1917 the Bolsheviks controlled both the Petrograd and the Moscow Soviets. ...read more.

Yet it was Joseph Stalin who was eventually to emerge as leader of the party. This was largely because Stalin was a clever and astute politician, who was seen as being a man of the people. He was able to manoeuvre himself into a position of power through his role as General Secretary of the Communist Party. Once in power, he exerted an iron grip on the USSR. Stalin's aims differed from Lenin's in that he did not expect to spread Communism worldwide until Communism was secure in the USSR. He also wanted to achieve autarky in agriculture (via the Kolkhoz) and industry via the Five Year Plans. The state took over planning for industry and agriculture with a commission called Gosplan to set targets for achievement. A five year plan set targets for all basic industrial factories and workers. The first five year plan concentrated on heavy industry, the second five year plan was similar to the first, but also developed transport and mining and the third five year plan put more emphasis on light industry, housing and consumer goods. ...read more.

The political system which existed in the Soviet Union under Stalin was a system of terror. The purges of the 1930s sent millions of Russians to their deaths, the population was scared of the secret police, the NKVD, and the forced collectivization of agriculture had wiped out a part of Russian society, the Kulaks. Due to Stalin's Purges the army and navy were seriously weakened by the loss of senior officers; however in Lenin's time in Russia he used war communism to help feed and strengthen the army. Stalin's dictatorship can be compared to Adolf Hitler as they ran everything by themselves and did whatever they felt like, even though others objected. Lenin was clearly had a greater impact on Russia as he was the one who contributed the most to the Revolution's and he got the Bolsheviks into power. He also helped to modernise Russia. Stalin was a dictator and he did not do as much as Lenin to help Russia. ...read more.