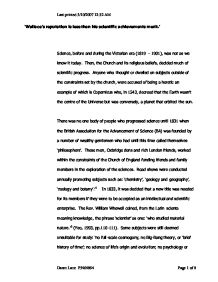 'Wallace's reputation is less than his scientific achievements merit.'

'Wallace's reputation is less than his scientific achievements merit.' Science, before and during the Victorian era (1819 - 1901), was not as we know it today. Then, the Church and its religious beliefs, decided much of scientific progress. Anyone who thought or dwelled on subjects outside of the constraints set by the church, were accused of being a heretic an example of which is Copernicus who, in 1543, decreed that the Earth wasn't the centre of the Universe but was conversely, a planet that orbited the sun. There was no one body of people who progressed science until 1831 when the British Association for the Advancement of Science (BA) was founded by a number of wealthy gentlemen who had until this time called themselves 'philosophers'. These men, Oxbridge dons and rich London friends, worked within the constraints of the Church of England funding friends and family members in the exploration of the sciences. Road shows were conducted annually promoting subjects such as: 'chemistry', 'geology and geography', 'zoology and botany'.'1 In 1833, it was decided that a new title was needed for its members if they were to be accepted as an intellectual and scientific enterprise. The Rev. William Whewell coined, from the Latin scienta meaning knowledge, the phrase 'scientist' as one: 'who studied material nature.'2 (Yeo, 1993, pp.110-111). ...read more.

He later wrote an essay, On the Tendency of Varieties to Depart Indefinitely From the Original Type, in which he introduces the idea of natural selection, and sent it to Darwin for publication. Unbeknown to Wallace, Darwin had also been thinking along the same lines for a number of years and had made notes that he had exchanged with a number of people but had not publicly published. Whilst Wallace was still absent his essay and Darwin's paper on the theory of natural selection were jointly presented at a meeting of the Linnean Society in London. The presentation of both men's writings was made in chronological order: 'extracts of the 1884 essay that Darwin had written but not published and which had been read by Hooker; a section of the letter dated September 1857 to the American naturalist Asa Grey which included: 'the part played by the principle of divergence,'10 and Wallace's paper. Because Darwin had written his papers first, he was attributed with discovering the theory of evolution by natural selection. Darwin went on to publish Origin of Species in 1859. From what I have read, I believe that Wallace was quite happy to have pushed Darwin into publishing his theories: 'I think, therefore, that I may have the satisfaction of knowing that by writing my article and sending it to Darwin, ...read more.

and support of double-time pay for overtime (1913).'15 By the time of his death in 1913 Wallace, although one of the best known naturalists of his time, science was moving on and he was seen as somewhat old fashioned. In 1917, the Secretary of the Royal Geographical Society wrote a letter to the Rev. St John Thorpe: 'He was a regular paradoxer in astronomy, and his opinions on vaccination, vivisection and such like matters were utterly opposed to the whole body of scientific thought.... Outside his special subject of Natural History Dr Wallace's judgement was not to be relied on.'16 Wallace made many great contributions to the scientific world and society as a whole; as a traveller, naturalist, bio-geographer and anthropologist, as a socialist campaigning for the rights of the poor and unprivileged not only in Wales and London but also in the Amazon and Papua new Guinea.'17 Wallace has been honoured as the great naturalist he was by the Linnean Society of London in many ways in the modern past. In April 2000, a wreath was laid on Wallace's grave in Broadstone cemetery when the Wallace family formally entrusted the lease of the grave to the Linnean Society. Wallace had finally received the merit he deserved. ...read more.