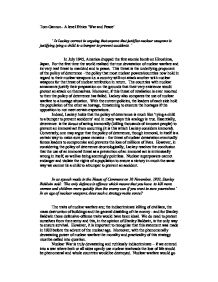 'War and Peace' - ' Is Lackey correct in arguing that anyone that justifies nuclear weapons is justifying tying a child to a bumper to prevent accidents. '

Tom Gannon- A level Ethics 'War and Peace' ' Is Lackey correct in arguing that anyone that justifies nuclear weapons is justifying tying a child to a bumper to prevent accidents. ' In July 1945, America dropped the first atomic bomb on Hiroshima, Japan. For the first time the world realised the true devastation of nuclear warfare and its very real threat to mankind and to peace. This threat is the underlying proponent of the policy of deterrence - the policy that most nuclear powers/countries now hold in regard to their nuclear weapons i.e. a country will not attack another with nuclear weapons for the threat of nuclear retribution in return. The countries with nuclear armaments justify their preparation on the grounds that their very existence would protect an attack on themselves. ...read more.

However, in considering the policy of deterrence deontologically, Lackey reaches the conclusion that the use of an immoral threat as a prevention of an immoral act is intrinsically wrong in itself, as well as being seemingly pointless. Nuclear superpowers cannot endanger and violate the rights of a population to ensure a victory in much the same way we cannot tie a child to a bumper to prevent an accident. In as speech made in the House of Commons on 10 November, 1932, Stanley Baldwin said: 'The only defence is offence which means that you have to kill more women and children more quickly than the enemy can if you want to save yourselves.' In an age of nuclear weapons, does such a strategy make sense? ...read more.

Nuclear warfare would go beyond the means of achieving the victory Stanley Baldwin saw in his day. It would be total obliteration. The policy of obliterating cities was adopted by the Allies in the last war and was born largely out of the hunger for retribution. This in itself is intrinsically and morally wrong and is the ugly side of war. Nuclear warfare and it's subsequent mass destruction, fuelled by something so trivial as revenge, would be pointless and morally wrong. Conversely, one may argue that we must use any means to fight aggression, especially against those with little or no ability to compromise but with the advent of the nuclear age this is a dangerous argument to uphold. Now with the knowledge of nuclear warfare it is important that we recognise it's destructive possibilities and, ultimately, that we learn to protect ourselves from ourselves. INTERNET SITES USED www.tsas-re.freeserve.co.uk www.faithnet.freeserve.co.uk www.rsweb.org.uk www.davidsemporium.co.uk www.bbc.co.uk/education www.guardian.co.uk/education/alevel ...read more.