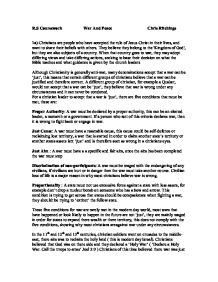 War And Peace - Questions on Christianity.

R.S Coursework War And Peace Chris Ritchings 1a) Christians are people who have accepted the rule of Jesus Christ in their lives, and want to share their beliefs with others. They believe they belong to the 'Kingdom of God', but they are also subjects of a country. When that country goes to war, they may adopt differing views and take differing actions, seeking to base their decision on what the Bible teaches and what guidance is given by the church leaders Although Christianity is generally anti-war, many denominations accept that a war can be 'just', this means that certain different groups of christians believe that a war can be justified and therefore correct. A different group of christian, for example a Quaker, would not accept that a war can be 'just', they believe that war is wrong under any circumstances and it can never be condoned. For a christian leader to accept that a war is 'just', there are five conditions that must be met, these are: Proper Authority: A war must be declared by a proper authority, this can be an elected leader, a monarch or a government. ...read more.

In the 11th and 12th and 13th centuries, christian soldiers went on crusades to the middle-east, there aim was to reclaim the holy land ( this is modern day Isreal). Christians believed that God was on there side and they declared a 'Holy War' ( 'Declare a Holy War. Call the trrops to arms' Joel 3:9 ) Christians of this time believed there war was just as they had met the five conditions of a 'just war'. These crusades caused problems between the christian and muslim communaties in that area for centuries to come. After the crusades reclaimed some land, Christian settlers began to flock to the 'reclaimed' holy land, causing rifts between the two communaties, christians today still believe that the Palestinian muslims are living on there holy land, and there is a type of war being waged in that region. The war however isnt between 2 states ( as Palestine isnt a state ), its mainly between the heavily armed and advanced Isreali (mainly christian) ...read more.

They refuse to take part in any wars, and in some countries are imprisoned for this act. The pacifist movement has grown a lot since world war 2, this is mainly because of a new threat od deadly weopans for example nucleur or biological. Most Christians believe war is isnt the right way to solve conflicts, but not all are pacifists, showing that some Christians believe war can be justified and therefore war isnt always wrong. A martyr is a term used to describe a person who is willing to die for there faith, a willingness to sacrafice your life is a key belief in several religons, such as Christianity and Islam. Most martyr's believe that when they die they will be closer to there God, and there God will treat them will and take them to a better place. Also there are people in the world who preach the gospels of Jesus agaisnt there countries laws, this shows that some christians are prepared to be punished for spreading the word of God. ...read more.