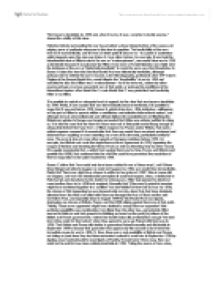 &quot;War became inevitable by 1939 and, when it came, it was a surprise to hardly anyone.&quot; Assess the validity of this view.

"War became inevitable by 1939 and, when it came, it was a surprise to hardly anyone." Assess the validity of this view. Historical debate surrounding the war has provided various interpretations of its causes and origins, some of particular relevance to the view in question. The inevitability of the war - how far it was inevitable, and if it was at which point it became so - is a point of contention which depends upon the view one takes of many other factors: for example, if one took the intentionalist view of Hitler's role in the war as "master-planner", one would view war in 1939 as inevitable because it was planned by Hitler; if one were a Marxist historian one might view the incidence of the war as "historically inevitable" in much the same way that Khrushchev in Source A takes the view that the Nazi-Soviet Pact was historically inevitable, although perhaps not for entirely the same reasons. Later historiography, particularly after AJP Taylor's Origins of the Second World War, would dispute the "inevitability" of war in 1939 and certainly the idea that Hitler was a master-planner - for if he were not, actions by other powers perhaps may have prevented war at that point; or perhaps ...read more.

Indeed the Soviet Union did precisely that and got "the best terms they could for themselves" when they agreed to carve up Poland with Germany in 1939. That Britain and France did decide to guarantee Poland's security and did decide in September 1939 to honour that guarantee thus appears by this account to have been the immediate cause for war in 1939. If, then, there was a real possibility of Britain and France not doing so (and since they had been somewhat content to avoid war in September 1938 by signing away Czechoslovakia's sovereignty at Munich, it would seem there was), then war could not be said to have been entirely inevitable in 1939. Taking the source at face value, then, in this respect the view in question would not (even though the source claims war could only have been avoided in three ways, which suggests a degree of inevitability) appear to be entirely valid. That the war was "a surprise to hardly anyone", however, is very debateable. It implies very strongly that most of the European powers were predicting war by 1939 and were aware of its imminence and inevitability. ...read more.

(The argument Richard Overy puts forward concerning the power balance of Europe is relevant here in explaining that there was a limit to how much of a blow to the European power status quo - which Germany wanted, as in WWI, to surpass - the West would tolerate.) Overall, then, the view is semi-valid; its claims are supported in some ways but contradicted in others (e.g. the claim implies rhetorically that no one was surprised by war and that everyone knew it was going to happen, when Hitler, crucially, probably did not). That war was inevitable by 1939 is arguable, but probably not entirely true purely in the sense that it's difficult to argue that anything was completely inescapable. In the context of the situation at the time, however, what was politically and economically possible (e.g. Britain calculated by 1939 that it could not sustain armaments on the scale it had been for much longer at all, and thus if war was going to happen it had to happen sooner rather than later) made war a far more difficult eventuality to avoid and a far more likely solution to be chosen. ...read more.