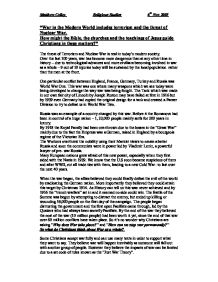 &quot;War in the Modern World includes terrorism and the threat of Nuclear War. How might the Bible, the churches and the teachings of Jesus guide Christians in these matters?&quot;

"War in the Modern World includes terrorism and the threat of Nuclear War. How might the Bible, the churches and the teachings of Jesus guide Christians in these matters?" The threat of Terrorism and Nuclear War is real in today's modern society. Over the last 100 years, war has become more dangerous than at any other time in history - due to technological advances and more civilians becoming involved in war as a whole - 9 out of 10 injuries today will be sustained by the local population rather than the men at the front. One particular conflict between England, France, Germany, Turkey and Russia was World War One. This war was one where many weapons which we see today were being developed to change the way war was being fought. The Tank which was made in our own fair city of Lincoln by Joseph Ruston may have failed at first in 1916 but by 1939 even Germany had copied the original design for a tank and created a Panzer Division to try to defeat us in World War Two. Russia was an example of a country changed by this war. Before it the Romanovs had been in control of a huge nation - 1, 33,000 people mainly serfs for 300 years in luxury. By 1918 the Royal Family had been overthrown due to the losses in the "Great War" mainly due to the fact the Empress was a German, raised in England by a bourgeois regime of the Victorian Era. The Workers overthrew the nobility using their Marxist views to create a better Russia and soon the communists were in power led by Vladimir Lenin, a powerful lawyer of pre- war Russia. Many European nations grew afraid of this new power, especially when they first sided with the Nazis in 1939. We know that the U.S soon became suspicious of them and after WWII, cut all trade ties with them, leading to a new Cold War- to last over the next 40 years. ...read more.

There is a story in Luke's gospel that tells us about Jesus healing a Centurions servant. This was a solider that was well respected and was praised by Jesus for his faith, without mentioning it was wrong to be a soldier. (Luke 7: 1-10) Another area of this would be that sometimes people fight to defend the weak and fight against an oppressive government. This is known as "Liberation Theology". It was started in Latin America and its main followers are with the Catholic religion that believes we "must fight against oppressiveness in these places of suffering". They believe that Christians have a duty to stand up against poverty, oppression and injustice. Some followers of this theology have become involved in violent struggles with governments in order to defend the weak. In Columbia, Farther Camiello Torres became a fighter against the Argentines. In some of those countries it is legal to kill priests and other leaders who stand up against them. Oscar Romero, a Catholic priest was shot dead during Mass because of his support for the poor of El Salvador. Some Christians disagree with Liberation Theology, saying that it is wrong for church priests to get involved with politics and wrong to use violence - even to defend the weak. They believe these priests join up with terrorists who are more focused on the leadership than the people. The message of Liberation Theology has spread to all parts of the world such as South Africa which still has apartheid problems today. Some Christians totally disagree with any form of violence. They are Pacifists and they believe in "the weapons of the spirit than those of metal ores". These Pacifists try to stop wars rather than letting them get out of hand. They are not passive - they put forward their beliefs for everyone to follow. Pacifists are representing most of the world's religions- not just Christianity. During times of War, people who object to being conscripted into the army are called "conscientious objectors". ...read more.

Many have blamed technological advances for the increase in nuclear arms being sold on to LEDC terrorist groups. The Churches view on this matter is clear and down to the point "An insane arms race swallowed up the resources needed for the development of national economies and for assistance to the less developed nations. Scientific and technological progress, which should have contributed to man's well being, was transformed into an instrument of war: science and technology were directed to the production of ever more efficient and destructive weapons." So really what is the answer to the idea of getting rid of nuclear warfare? The majority of the population feel that non- violent protest is the answer to this problem. The Church also could preach their support through sermons "Though the monstrous power of these weapons act as a deterrent, it is to be feared that the mere continuance of nuclear tests undertaken with war in mind, will have fatal consequences for life on earth. Justice, right reason and humanity therefore, urgently demand that the arms race should cease; that the stockpiles that exist in various countries should be reduced equally.... Nuclear weapons should be banned". (Roman Catholic teaching, Pacem in Terris.) Protesting to the government would bring international attention on this issue and many feel that we should get the nations of the world to destroy their nuclear weapons. Yet many of the MEDC's are reluctant to give up their nuclear weapons as this would mean they lose their security backups if they were invaded by the enemy. The USA is one of those nations who despise nuclear warfare but continue to hold nuclear weapons. I believe that it is up to you whether you think war is right or wrong. For some people like soldiers it is a way of life, for others it is a sin which they will be punished for in the future. "We used to wonder where war lived - what it was that made it so vile. And now we know where it exists; that it is inside ourselves". Matthew Colley Religious Studies 6th Nov 2003 ...read more.