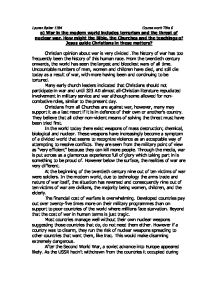 War in the modern world includes terrorism and the threat of nuclear war. How might the Bible, the Churches and the teachings of Jesus guide Christians in these matters?

Lauren Baker 11B4 Course work Title 6 a) War in the modern world includes terrorism and the threat of nuclear war. How might the Bible, the Churches and the teachings of Jesus guide Christians in these matters? Christian opinion about war is very divided .The history of war has too frequently been the history of this human race. From the twentieth century onwards, the world has seen the largest and bloodiest wars of all time. Uncountable numbers of men, women and children have died, and still die today as a result of war, with more having been and continuing to be tortured. Many early church leaders indicated that Christians should not participate in war and until 323 AD almost all-Christian literature repudiated involvement in military service and war although some allowed for non-combative roles, similar to the present day. Christians from all Churches are against war, however, many may support it as a last resort if it is in defence of their own or another's country. They believe that all other non-violent means of solving the threat must have been tried first. In the world today there exist weapons of mass destruction; chemical, biological and nuclear. These weapons have increasingly become a symptom of a divided world that seems to recognize violence as an acceptable way of attempting to resolve conflicts. ...read more.

Although Christian opinion on war is incredibly varied, each and every Christian is affected by what they are taught through Jesus' teachings in the Bible, and by their churches. Generally Christianity is known to be a loving religion in which its followers care for everyone around them, and do their best to live their life in the way they think God wants them to. The majority of Christians do not agree with war because the Bible teaches them to love their enemies. However the Bible also suggests that God commands some wars. The Campaign for Nuclear Disarmament (CND) argues that we do not and did not ever need nuclear weapons. Many Christians agree with this and many are members of a branch of Christian CND. Pope John XXIII supported this view in the letter "Pacem in Terris" which also said that the arms race should end and all nuclear arms be banned. If a nuclear war broke out millions of people, possibly the whole world would be killed, and the balance of nature would be destroyed maybe forever. Any war in which nuclear weapons were used could easily become an all-out war. Christians that do not agree with war may use the just war theory if they feel a certain war does not follow the theory's rules. ...read more.

The main reason for such diversity in Christian attitude is the way in which God's followers choose to interpret religious texts. Different churches interpret some teachings in different contexts so for each Christian their attitude is heavily affected by which church they belong to. Certain bible texts would support Christian's religious beliefs for or against the idea or fighting and warfare. For example one of the Ten Commandments, which are like guidelines for Christians to live by, reads " Thou shall not kill," so Christians who take the Bible very seriously would follow that rule. Another example of a Bible text that promotes non-violent protest instead of war, is Matthew 26 51-52 in which Jesus orders,"put up again thy sword for all who take the sword shall die by the sword." However there are occasions in the Bible when people are told by god to attack those who oppose them, such as Exodus 21:23-24,"if there is serious injury take life for life, eye for an eye, tooth for tooth..." This famous expression is seen by some Christians to limit revenge but by others to encourage it. All that is left is the hope that government leaders can come to a sensible conclusion over present matters, but what will happen will not remain a mystery for much longer. What will it take for humankind to learn its lesson; I would not like to know. ...read more.