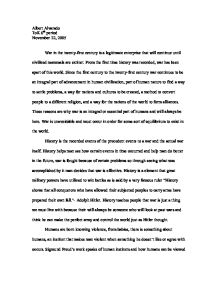 War is a legitimate enterprise in the twenty-first century.

Albert Alvarado ToK 6th period November 22, 2005 War in the twenty-first century is a legitimate enterprise that will continue until civilized mammals are extinct. From the first time history was recorded, war has been apart of this world. Since the first century to the twenty-first century war continues to be an integral part of advancement in human civilization, part of human nature to find a way to settle problems, a way for nations and cultures to be created, a method to convert people to a different religion, and a way for the nations of the world to form alliances. These reasons are why war is an integral or essential part of humans and will always be here. War is unavoidable and must occur in order for some sort of equilibrium to exist in the world. History is the recorded events of the precedent events to a war and the actual war itself. History helps man see how certain events in time occurred and help man do better in the future, war is fought because of certain problems so through seeing what was accomplished by it man decides that war is effective. ...read more.

Leaders want to get more land or more resources so they invade a weaker country and that causes anger so in return many smaller nations join together because of anger, they overpower the one powerful nation and war ignites. If all countries were independent and didn't help each other, one powerful country would consume most of the world if not all of it. Even if this scenario were to occur, over time different people with different believes would emerge and rebel against nation leaders and would come together because of anger and overthrow the leaders in civil wars. Again, there is no way to stop war, people have different thoughts. The different cultures throughout the world come from interbreeding of different nations that combine to make a new nation. War is the reason why many diverse cultures exist. "War created our diverse world and will end it if it's not stopped."-Huriguyi Toriyama. Our world was made like it is now and our cultures are as advanced in technology because of our desire to have war. ...read more.

"War is the continuation of politics by other means"-Karl Von Clausewitz. Politics were created so not only the strong would be powerful, so no totaliarism would exist in the world. With no War humans would be under the control of few strong nations that would make them do what the leaders wanted them to do, war is a means of taking power from the strong and spreading it out into a more civilized government. War is a way of balancing the world. No war means that only the powerful rule and no one questions their authority. In conclusion, it is just human nature, war is a legitimate enterprise in the twenty-first century because without war the world cannot have balance of power, War is unavoidable and must occur in order for some sort of equilibrium to exist in the world. Through history we can see that with religion peace will never exist in this world and its impossible to remove all religion because more will eventually be created. War is here to stay and can not be taken away, its in our blood to fight for what we want or believe in. ...read more.