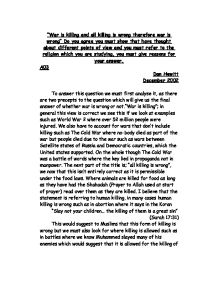 &quot;War is killing and all killing is wrong therefore war is wrong&quot; Do you agree you must show that have thought about different points of view and you must refer to the religion which you are studying, you must give reasons for your answer.

"War is killing and all killing is wrong therefore war is wrong" Do you agree you must show that have thought about different points of view and you must refer to the religion which you are studying, you must give reasons for your answer. A03 Dan Hewitt December 2002 To answer this question we must first analyse it, as there are two precepts to the question which will give us the final answer of whether war is wrong or not."War is killing"; in general this view is correct we see this if we look at examples such as World War 2 where over 52 million people were injured. We also have to account for wars that don't include killing such as The Cold War where no-body died as part of the war but people died due to the war such as wars between Satellite states of Russia and Democratic countries, which the United states supported. On the whole though The Cold War was a battle of words where the key lied in propaganda not in manpower. ...read more.

as he is carrying out the actions of the prophet. The Shi'te side of Islam is often seen as a more violent side of Islam and have their own army made of warriors who are willing to fight in the name of Allah. Many Shi'tes encourage martyrdom and are even reminded of it in prayer, when the prostrate themselves they rest their heads on a bit of soil from where Husayn died, Husayn was the grandson of the prophet and is viewed by Shi'tes to be the last true Khalifah (Steward). The Shi'te side of Islam is the side of Islam which is often seen in the west as all of Islam as in the news reels they don't say what side of Islam they are from but instead cast them over with the name Islam. As Shi'tes are more extremist and are often the Muslims who carry out the terrorist attacks the west due to media believe that all Muslims are like the Shi'te sector where in fact only one in ten Muslims are Shi'tes and that all of Islam is a violent religion which it isn't and just some extremist give this unjust name to the entire religion. ...read more.

to bring forward the time of death as it says so in the Koran; "When their time expires, they will not be able to delay for a single hour, just as they cannot bring it forward." (Surah 16:61) I believe that a lot of killing is wrong even if it is for sinning as it may be a terrible punishment for the sinner but it will have affects on the rest of the family as well as they are left to bare the consequences of their family members death. I also believe that the punishment for murder shouldn't be death as that is following the " Eye for an eye" tactic and as Ghandi said; "An eye for an eye and the whole world would be blind" I also believe that war is a good choice as in many cases it is the last resort and if we didn't have wars tyrant rulers would be able to exploit these rules to their advantage and would be able to do whatever they wanted. We have to accept though with war that killing is often a side-affect as ...read more.