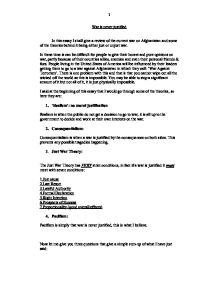 War is never justifiedIn this essay I shall give a review of the current war on Afghanistan and some of the theories behind it being either just or unjust war.

War is never justified In this essay I shall give a review of the current war on Afghanistan and some of the theories behind it being either just or unjust war. In these time is can be difficult for people to give their honest and pure opinions on war, partly because of their countries allies, enemies and even their personal friends & foes. People living in the United States of America will be influenced by their leaders getting them to go to a war against Afghanistan in which they call: 'War Against Terrorism'. There is one problem with this and that is that you cannot wipe out all the wicked off the world as this is impossible. You may be able to stop a significant amount of it but not all of it, it is just physically impossible. I said at the beginning of this essay that I would go through some of the theories, so here they are: 1. ...read more.

This would be pathetic as the Americans have the Laguna Seca Raceway and it just seems so childish. Anyway, back to the point, this theory has to include two states, one being attacked and the other doing the attacking. The problem with this is that no state attacked America, it was an organisation. So this part of the Just Cause Test has been failed. Now for the second condition. Last Resort This condition states that if all other reasonable (in the eyes of the theory) options have been exhausted then the best option can be taken. It seems debatable that other options have not been exhausted, so another failure. Lawful Authority & Formal Declaration The war must be formally declared to the public and the opposing state. Bin Laden has completely failed this test, but the USA has formally declared their war. This test has been passed with flying colours Right Intention Not only do states have to have a just cause, they must let the public know about it, not just some hidden intention like the imaginary example I gave earlier. ...read more.

Also, utilitarianism requires not just that the results of war be on balance but on the war being the alternative with the best results, which is even more doubtful. Completely failed. Consequentialism According to Consequentialists the key question is: Will the final strategy minimise the bad-effects compared to all the other options? You must consider that all lives are equal. So, if all lives count equally, then a military strategy that kills many more civilians for the sake of a smaller reduction in military casualties on one side cannot be justified on consequentialist justifications. But this is precisely the reason why the US and its allies have used massive air strikes in what they say is the 'first phase' of the war. It seems likely that this strategy does not minimise the bad effects compared to all alternatives and so any consequentialist justification is doubtful. Summing up I believe that there is no such thing as a 'just war' and countries should stop, tidy up and talk, it would save a lot of lives and be a lot more logical, even if it means translating! (c) Zeb Gostelow 10F 1 ...read more.