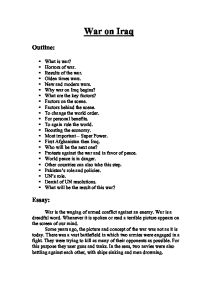 War on Iraq Outline: * What is war? * Horrors of war. * Results of the war. * Olden times wars. * New and modern wars. * Why war on Iraq begins? * What are the key factors? * Factors on the scene. * Factors behind the scene. * To change the world order. * For personal benefits. * To again rule the world. * Boosting the economy. * Most important - Super Power. * First Afghanistan then Iraq. * Who will be the next one? * Protests against the war and in favor of peace. * World peace is in danger. * Other countries can also take this step. * Pakistan's role and policies. * UN's role. * Denial of UN resolutions. * What will be the result of this war? Essay: War is the waging of armed conflict against an enemy. War is a dreadful word. Whenever it is spoken or read a terrible picture appears on the screen of our mind. Some years ago, the picture and concept of the war was not as it is today. ...read more.

There are lots of reasons and factors for this US-led attach on Iraq. Some of them are on the scene and some of them are behind the scene. As you all know, US never work on a single agenda. They have different points in their so-called masterminds. The point that US raises in front of UN and in front of the whole world is that Iraq has nuclear weapons and these weapons are very dangerous for the peace in US and in the whole world. They started doing propaganda and making a horrible picture of Iraq in front of their state and the whole world. They said that Iraqi government is terrorist. They will use their nuclear weapons against US. United Nations send their inspectors to inspect sensitive places in Iraq in order to find that whether there are any nuclear weapons present in Iraq. The UN inspectors after inspection presented their reports in which it was evident that Iraq does not have any nuclear missiles or weapons. After this US changed its policy and stated that they gave fear from Iraqi government and they are going to change the regime of Saddam Hussein. ...read more.

First of all they have to be disarmed. At first they attacked Afghanistan, then Iraq. Who will be the next? We have to think about it. UN is a dummy entity. Its role is so negligible in the sight of such powerful states. The countries themselves have to think about it seriously. May be they'll be the next one. All countries should protect their sovereignty but also ensuring peace and stability. World's peace is in great danger at this time. Other powerful countries can also take this step against their weak rival countries. India can attack Pakistan. India is already equating Iraq with Kashmir. The world leaders should think about it seriously. Pakistan government's role is not so clear about this war. They have adopted a diplomatic policy. But the people of Pakistan condemn this war whole-heartedly. They protested against the war. Pakistanis are peace lovers. They want peace all over the world. War is an abominable, inhuman activity. Man's war impulse is the darkest side of his nature, and the result is dreadful. The only way to escape the horrors of war is to stop war. If every nation agrees to settle its disputes through peaceful means, on and around the table, not by war, we can hope for a bright future for humanity. ...read more.