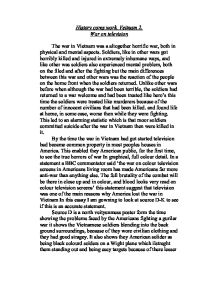 History cores work. Veitnam 2. War on television The war in Vietnam was a altogether horrific war, both in physical and mental aspects. Soldiers, like in other wars got horribly killed and injured in extremely inhumane ways, and like other was soldiers also experienced mental problem, both on the filed and after the fighting but the main differences between this war and other wars was the reaction of the people on the home front when the soldiers returned. Unlike other wars before when although the war had been terrible, the soldiers had returned to a war welcome and had been treated like hero's this time the soldiers were treated like murderers because of the number of innocent civilians that had been killed. and found life at home, in some case, worse then while they were fighting. This led to an alarming statistic which is that moor soldiers committed suicide after the war in Vietnam then were killed in it. By the time the war in Vietnam had got started television had became common property in most peoples houses in America. This enabled they American public, for the first time, to see the true horrors of war In graphical, full colour detail. ...read more.

This source is describing the difficulty's of fiting the veitymens because they look so much like civilians 'did one of them (the pesents lob the morta? if so which one? Should we kill all of them or none of them'-sorce F the source is highlighting how much of an imposable war it was to fight and how they American solders were left to make desitions that they couldn't make. This can be seen as being aginsed the idear that television lost the war for the American solders because again it is describing the hopelessness of the stare of the warfare. This soure is farly reliable because it is whiten at the time by an American journalist and he wouldn't want to make the affair seem any worse then it was. The source could, again, also be preserved as beying for the augment that television was responsible because again if this statement was put in the media it would convince the American people of the hoplness of the war and how is was a waste of life and money. Sorce G is the reaction of an American solider when he was told about the massacre of 347 unarmed civilians at My Lai. ...read more.

In conclusion I believe that alogh the televisation of the war had a big part to play in the American retreval and the unpopularity of it among the citizens I do not think it was solely to blame for the Americans pulling out. I think it was a part of a combination of events. First of all as described in source D and F a gorrilar war was veary difficult to fight. It cost they Americans huge loss of life and led to them killing civilians which leads to the second point which is converge by television of the war which ternd the public against it which was another major facto. But I think the main reson was president Johnson whished to stay popular with the people. And he could do this in 2 ways by ending the war, he could make all the protesters happy that had been ternd agains it by the median and he could also stop spending the countries valubvul money that he had promised to spend on improving the county. All in all as you can see television did play an important part in the ending of the war, both directly and indirectly but it certainly wasn't soly responsible. ...read more.