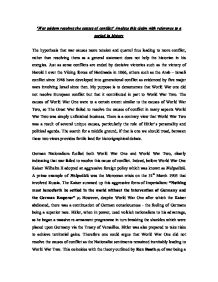 'War seldom resolves the causes of conflict' Analyze this claim with reference to a period in history.

'War seldom resolves the causes of conflict' Analyze this claim with reference to a period in history The hypothesis that war causes more tension and quarrel thus leading to more conflict, rather than resolving them as a general statement does not help the historian in his energies. Just as some conflicts are ended by decisive victories such as the victory of Harold I over the Viking forces of Hardraada in 1066, others such as the Arab - Israeli conflict since 1948 have developed into generational conflict as evidenced by five major wars involving Israel since then. My purpose is to demonstrate that World War one did not resolve European conflict but that it contributed in part to World War Two. The causes of World War One were to a certain extent similar to the causes of World War Two, so The Great War failed to resolve the causes of conflict in many aspects World War Two was simply unfinished business. There is a contrary view that World War Two was a result of several unique causes, particularly the role of Hitler's personality and political agenda. The search for a middle ground, if that is one we should tread, between these two views provides fertile land for historigraphical debate. German Nationalism fuelled both World War One and World War Two, clearly indicating that war failed to resolve this cause of conflict. Indeed, before World War One Kaiser Wilhelm II adopted an aggressive foreign policy which was known as Weltpolitik. A prime example of Weltpolitik was the Moroccan crisis on the 31st March 1905 that involved Russia. The Kaiser summed up this aggressive form of Imperialism: "Nothing must henceforth be settled in the world without the intervention of Germany and the German Emperor" (1) However, despite World War One after which the Kaiser abdicated, there was a continuation of German consciousness - the feeling of Germans being a superior race. ...read more.

It is also the enemy against which we most urgently require a certain measure of naval force as a political power factor" (6) The Naval Arms race was one of many unique causes which contributed to World War One as it was not replicated when World War Two arose. The Balkans was a continuous source of conflict prior to World War One between Austria and Russia. This is due to the fact that both powers were vying for greater influence in the area, and equally these powers held a right to do so as Russia, predominantly a Slav country, felt that they should have an influence with their fellow Slavs, the liquidation of the Turkish Empire strained Russia to back Serbia in order for Russia to have some influence in the Balkans. However, Austria felt that if she did not have an influence in the area, Russia's policy would lead to a surge of Slav nationalist spirit with the inevitable result that Austria's Slavic peoples would rise up and overthrow Habsburg rule. After World War One Austria was given a blank cheque by Germany who promised to back Austria no matter what, militarily and economically as Austria's power was eroding. One could argue that Austria was pursuing an aggressive policy in the Balkans with the knowledge of having the strongest European power on their side, this lead to the Balkans being unhinged and hostile. Just as Nationalism brought about the unification of Germany it also on the other hand, weakened the eastern European empires of Austria-Hungary, Russia, and the Ottoman Empire. Those empires ruled many national groups that clamored for independence. The instability that followed in the Balkan Peninsula or the "Powder Keg of Europe" would lead to World War on a grand scale. Just as World War One was caused by several unique factors, World War Two also had some distinctive causes. The personalities of both German leaders played an exceptional role on the road to war. ...read more.

The latter seems somewhat unjustified because it is impossible to plan events much before they occur, it would seem that A.J.P Taylor's analysis of Hitler is more accurate and justified because it is more realistic and sensible. Generalizations about the causes of world wars are a very difficult thing to do. No two wars are exactly the same; they are between different countries, over different issues and are started in different ways using different technology, so to try to find common causes is always going to be difficult. Booth states there are three levels at which you can analyze the causes of war. Firstly at an individual level of war being caused by the result of man's innate violent nature, by applying this theory to Hitler and the Kaiser it would seem that the aggressive foreign policies pursued led to World Wars. The expansionist tendencies that caused the Wars coincide with the theory of war being caused on a national level, the German population wanted Germany to be strong and a potential European leader. The final level of analysis is on the international stage, Booth's theory claims that war is caused by a lack of international security measures. This is evident as the League of Nations failed to police the world as World War Two arose. On one hand it could be said that war seldom resolves the causes of conflict because we are yet to see a World War III. But then one could argue that war does not resolve the causes of conflict because after World War Two the US and USSR were involved in a Cold War. A culmination of many inveterate factors pointed directly toward armed conflict on a grand scale, both small and large events contributed to war and it was impossible to control the situation in anyway. Tension was a very large contributor to war. In some cases, you could say that no one was to blame and that war was inevitable. This is summed up by Bertolt Brecht who said: "War is like love: it always finds a way" (13) Word count: 3302 ...read more.