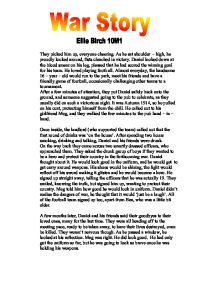 They picked him up, everyone cheering. As he sat shoulder - high, he proudly looked around, fists clenched in victory. Daniel looked down at the blood smear on his leg, pleased that he had scored the winning goal for his team. He loved playing football. Almost everyday, the handsome 16 - year - old would run to the park, meet his friends and have a friendly game of football, occasionally challenging other teams to a tournament. After a few minutes of attention, they put Daniel safely back onto the ground, and someone suggested going to the pub to celebrate, as they usually did on such a victorious night. It was Autumn 1914, so he pulled on his coat, protecting himself from the chill. He called out to his girlfriend Meg, and they walked the few minutes to the pub hand - in - hand. Once inside, the landlord (who supported the team) called out that the first round of drinks was 'on the house'. After spending two hours smoking, drinking and talking, Daniel and his friends were drunk. On the way back they came across two smartly dressed officers, who approached them. They asked the drunk group of boys if they wanted to be a hero and protect their country in the forthcoming war. Daniel thought about it. He would look good in the uniform, and he would get to get carry around weapons. ...read more.

He walked faster, over - taking his closest friend, James. They wished each other luck, and Daniel carried on walking, wishing that he could turn back. Then he heard a bloodcurdling scream behind him. He would never forget that sound throughout his whole life. He turned around. James was lying there, screaming. Daniel looked at his friends face. It had half been blown off, along with his left arm. Daniel wanted to help James so badly, but he knew he couldn't. He ran towards James, in shock. Firstly because of how James looked, secondly because Daniel was so close to him, and lastly because if he had not over - taken James, that could have been himself lying there. Daniel started crying hysterically, as James uttered his last words, telling Daniel to leave him, and continue. Then the guilt set in. 'If I hadn't have run forward, James could still be alive.' Daniel thought. "Go......." James mumbled, then closed his remaining eye forever. Daniel bravely pulled himself up, now weak. He pulled himself away. He was going to continue. He would survive. He would do it for James. He ran onwards, almost tripping over an unidentifiable body. He fired again, knowing he had just taken another innocent life. Perhaps he had just put someone through what he had been through when James was killed. ...read more.

Others had fallen around him, many dead. Daniel wished that he could be one of them. They seemed lucky, compared to the state he was in. He winced as the pain seemed to kick in again. He could see his men running towards no mans land, getting smaller and smaller as they got closer to the final fight. Then Daniel screamed again as shrapnel hailed down on him. The pain was even worse than before. His right leg had now been destroyed. At that point, Daniel couldn't think straight. His first thought was 'please let me die, this is agony'. But then he remembered Meg, and his family. And football. He would never be able to play again. Then his surroundings started fading to black. He had passed out. ((((((((((((((((((((((((((((((((( The next thing Daniel knew, he was in a hospital bed. His face was wrapped in bandages, and he was in agony. A few days later, once he had woken up, all the bandages were removed, and he was placed in a wheelchair. Then he looked down, and the shock hit him. His legs were....gone. They had been amputated just under his knee. He went to touch his face so he could feel what had happened. He only had half of his right arm! Daniel felt sure that he could feel his arm there, almost like a phantom limb, but when he looked, there was nothing there but a tiny stump. ...read more.