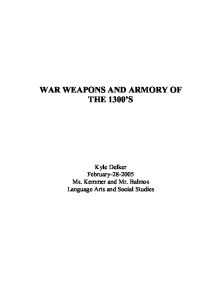 WAR WEAPONS AND ARMORY OF THE 1300S

WAR WEAPONS AND ARMORY OF THE 1300'S Kyle Delker February-28-2005 Ms. Kemmer and Mr. Balmos Language Arts and Social Studies The weapons of the 1300's were very deadly and brutal than the weapons of the modern world, like Greek fire. Greek fire was a gasoline that was poured onto and when ignited it could easily set many naval ships a blaze. The soldiers sometimes even carried grenades, or even used elephants in the warfare (http://www.sfusd.k12.ca.us/schwww/war/weapons2/html). The exploding weapons of the 1300's ere very effective but played a minor roll in warfare. The Greek fire was a very useful weapon to the navies. The Greek fire was a type of primitive gasoline that was poured on the water and ignited when an enemy ship was near by. The ship would burn and sink very easily since all the ships during the 1300's were made of wood. Another type of gasoline was called Naphtha. ...read more.

Through most of the 1300's the sword was almost always the same, straight double edged weapons. It wasn't till the late 1300's the curved swords were introduced. One example of the curved sword is the Flamberge. This sword was a highly unusual sword. The blade of the sword was waved and the wave effect was said to make the sword more stylish but more importantly more deadly (http://www.sfusd.k12.ca.us/schwww/war/weapons2/html). Even tough the sword was more popular than almost any weapon the Flail was a lot more powerful and more deadly. The Flail was a heavy spiked ball attached to a metal or wooden handle by a chain. This weapon was so powerful it could penetrate through almost any armor. The only bad thing about this weapon was only very skilled horseback riders because the direction of the flails spinning, the momentum of the horse, and they had to be a good enough aim to hit the enemy that was at least three feet shorter than you and the horse (http://www.sfusd.k12.ca.us/schwww/war/weapons2/html). ...read more.

Even though the archers were hardly ever on horse back the Turks trained their soldiers how to ride and shoot backwards. So when in battle they could trick the enemy into thinking that they were retreating, but then turn around and fire at them while they still were retreating. This technique was really a game previously. Riders would ride past a target , turn around, and try to hit the target. Another game that is connected to the battle field is a game were how every shoot the arrow the farthest wins. It did not matter were the arrow landed, just how far it goes. Some highly skilled archers could shoot over a half a mile. Archers were made their bow stronger just to be able to shoot it far. They did this by putting horn or sometimes even metal on the inside of the bow ( facing them) and animal guts or intestine on the outside of the bow, the guts made the bow spring faster ...read more.