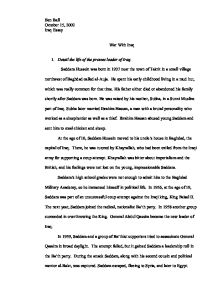 Ben Ball October 15, 2002 Iraq Essay War With Iraq 1. Detail the life of the present leader of Iraq. Saddam Hussein was born in 1937 near the town of Takrit in a small village northwest of Baghdad called al-Auja. He spent his early childhood living in a mud hut, which was really common for that time. His father either died or abandoned his family shortly after Saddam was born. He was raised by his mother, Subha, in a Sunni Muslim part of Iraq. Subha later married Ibrahim Hassan, a man with a brutal personality who worked as a sheepherder as well as a thief. Ibrahim Hassan abused young Saddam and sent him to steal chicken and sheep. At the age of 10, Saddam Hussein moved to his uncle's house in Baghdad, the capital of Iraq. There, he was tutored by Khayrallah, who had been exiled from the Iraqi army for supporting a coup attempt. Khayrallah was bitter about imperialism and the British, and his feelings were not lost on the young, impressionable Saddam. Saddam's high school grades were not enough to admit him to the Baghdad Military Academy, so he immersed himself in political life. In 1956, at the age of 19, Saddam was part of an unsuccessful coup attempt against the Iraqi king, King Faisal II. ...read more.

The war with Iran had left Iraq's economy in ruins. Iraq still had limited geographical access to the Persian Gulf, and the war left Iraq's oil shipping capacity severely diminished. However, relations between Iraq and Kuwait deteriorated with the reawaking of old issues with the border and Kuwaiti sovereignty. Historically, Iraq had thought that Kuwait had been a part of Iraq. In 1990, Iraq invaded Kuwait. In a matter of hours Iraq had seized nearly a quarter of the world's oil supplies. Saddam Hussein, sensing growing opposition to the invasion, tried to rally Arab support. He told his country to prepare for war, ordering Iraqi women to cut their families' food consumption in half. He was betting ordinary Iraqi citizens' safety on the dream of a greater Arab glory. But not all Arab states were convinced. Fearing it would be next, Saudi Arabia requested protection from the United States, which began amassing forces there. After 3 months of failed negotiations and careful planning, the U.N. Security Council issued a deadline for Iraq's withdrawal from Kuwait. When the deadline, passed a worldwide coalition (including the United States) under U.N. authority lunched Operation Desert Storm to liberate the tiny country from its aggressive neighbor. In 1991, a cease-fire was announced. By this time the U.N. ...read more.

Who's to say that a regime change would not bring about anarchy, or worse, leaving the country in the hands of the Islamic fundamentalists? This war could come at great monetary expense to the United States. It could be very risky for the U.S. to go to war with Iraq without help from our Allies and the U.N. Given that the United Nations is the governing body that imposed the current sanctions, it seems smart for the United States to ask for its support, and not go it alone. If we were to go to war without help, and be successful in the end, we would be the only ones rebuilding Iraq. The expense alone is not justifiable as well as the loss of human life on both sides. 6. What would ease the tensions between America and Iraq? A way to ease the tensions between the two countries would be for Saddam Hussein to allow U.N. weapons inspectors back in the country, under new U.N. resolutions. Also, if the United States, working with the U.N., would lift the current trade embargo and sanctions against Iraq, a trust from the Iraqi government and people could be established, ending years of hardship. Talking openly is always the best solution in conflict. With trust, the U.S., with the U.N., and Iraq could try to find a solution or resolution without all the bloodshed, without war. This would save many peoples' lives, and ease worldwide tension. Give diplomacy a chance. ...read more.