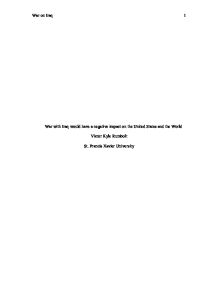 War with Iraq would have a negative impact on the United States and the World Victor Kyle Rumbolt St. Francis Xavier University Most recently, tensions between Iraqi President Saddam Hussein and United States President George W. Bush have been culminating. According to Dobbin (2002), President Bush stated himself, 'The debate about whether we're going to deal with Saddam Hussein is over. Now the question is how do we deal with him.' The reason for tension between these two countries dates back to a relatively short but damaging history in terms of reputation, lives and dollars. In 1990 the short lasting Persian Gulf War began. Led by the elder George Bush, Iraq was clearly out matched and was quickly defeated. The post war scheme involved Iraq being subject to, and closely monitored, by United Nations arms inspections. Then in 1998 Iraq ceased to co-operate with inspectors and air strikes led by the United States began in an attempt to demobilize Saddam's chemical, biological and nuclear weapons development programs. Since then, sanctions have been placed on Iraq, causing the people of Iraq to be destitute and starving. However an agreement could not be met between the United Nations and Iraq, which brings us to today, with yet another George Bush planning to run into battle once again turning the already war torn country into greater ruins and producing even more poverty to the desperate civilians of Iraq. According to Lewine: "Bush has described Iraq as part of an 'axis of evil,'" One has to wonder what are George Bush's morals. ...read more.

was to seize control of Iraqi oil reservoirs, which would most likely be the case after an attack, George W. Bush would ensure that for years to come, his country would have cheap crude. After all George Bush was in the oil business himself, and he also decided to build a rig on a reserve in Alaska, so what is to stop him from using Iraq's oil for his own benefits? Bush is constantly doing what he wants, and getting what he wants, without paying attention to the world around him. In an article by Levin (2002) it is stated that: "Bush is beyond a doubt, the World's Greatest Living Example of how a lucky few get exactly what they want, whether they deserve it or not. And now, as the World's Most Powerful Man, he seems intent on acting as if the globe is his frat house." Bush rarely takes the advice of what the rest of the global community has to say. As stated by Dyer (2002): "America's friends and allies are close to unanimous in believing that an attack on Iraq would be stupid, illegal, costly in American and Iraqi lives and enormously counter-productive in terms of Middle Eastern politics." France, China and Russia have shown that they are clearly against the attacks. As the French President Jacques Chirac states: 'we are beginning to see the temptation of legitimizing the unilateral and preventive use of force - this development is worrying'. ...read more.

He is putting much of his government's attention on Iraq, while his own country is in recession. He is wasting tax payer's money and national resources for an unworthy cause. He listens but doesn't take the advice of his countries allies. He is becoming known as a type of "bully" doing as he pleases when he pleases for reasons that please himself. Iraq itself does not pose any immediate threat to the United States. It doesn't have the developed technology capable of attacking the "homeland" of the United States. It is in fact no where near reaching these types of advanced weapons. Shoe bombs and Suitcase bombs pose much more of a threat then Saddam's "arsenal of mass destruction" on the other side of the world. Whether Bush is looking for cheap oil, trying to finish what his father started or even diverting attention away from the up coming election is unknown, however, what is known is that the United States has no equitable right or reason to simply march into Iraq and destroy a country which has been devastated by wars for much of its existence. Rather then being the Police of the world, which the United States once was, Bush and the U.S administration seem to be becoming corrupt. A statement by Martin(2002) sums up the topic with: One of the charges against the Nazi leaders at Nuremberg was that they "plotted aggressive war" against countries such as Czechoslovakia, Poland, Denmark, Norway and Yugoslavia. Similar charges would be in order against high officials in Washington, as they openly scheme to wage war against a country that poses no credible threat to the United States. ...read more.